Last week Elga Sarapung gave a talk at the WCRP Conference in Vienna, as I wrote already earlier in my blog. She has sent to friends her talk about the theme of the conference: in a time of global migration there is a need for welcoming the other even welcoming each other.
In her speech she mentioned in one sentence three major sermons for mankind: the Buddha in Benares, the Sermon of the Mount of Jesus and the farewell sermon of Muhammad, all three stressing the mutual love for the other. That is the kalimatus sawa the backbone of the document  'A Common Word'. About Indonesia she regretted the mechanism that a majority is claiming more rights than the minorities are given. Therefore groups like Ahmadiyah, Shia Muslim in Madura/Sampang, but also Christians like GKI Taman Yasmin suffer discrimination. One quote:
In times like this, we need, not only smart, but also wise, firm, courageous, and committed government that has the much-needed integrity based on Pancasila and the Constitution, from the local one to the national one. We acknowledge and appreciate the effort put by several local governments, which have the capability and have implemented it in reality. 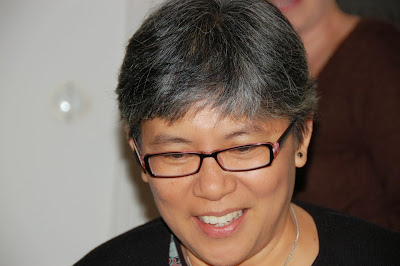 About majority-minority, I was thinking about a case I heard a few years ago in Nottingham: for the first time a Muslim, Mohammed Munir, was elected Lord Mayor of Nottingham (period 2006-2008). The inauguration usually took place in a religio-civil service in the Anglican Church, with a prominent role for the clergy. Mohammed Munir wanted to continue this tradition. The clergy made some changes in the formulas, in order to make them more acceptable to people of other religions as well, but the tradition could be continued in Nottingham Cathedral!
Elga also added a quote from Muhammed the Prophet through Djohan Effendi:
Seeing how it is in reality today, I am intrigued to quote what  is stated in Djohan Effendi’sbook. He quoted what Prophet Muhammad, s.a.w. once said, “I am worried,  there will come a time when Islam is just like another  name, Al Quran is just words,  mosques are seemingly full with people but absent of  directions, religious figures are as evil as humans under the roof of the sky, and from and to  them comes lies.” Even though his saying was directed for muslims, but I think and I believe  other religious groups other than muslims feel  and experience the same way in their own groups.
We need more couragious attacks on the monopoly of the monotheist religions.