Old and young in Jakarta

The second full day in Jakarta of my 4-13 December 2013 visit, was a very Catholic experience. First I walked to the nice house where Adolf Heuken lives since the late 1960s, weith his publishing house CLC, Cipta Loka Caraka, another meaning for the new name of Marian Sodalities or Christian Life Communities.
Heuken has written encyclopedic works about the Catholic Church in Indonesia, but is best know as the expert on the history of Jakarta. He had on 15 May 2013 received an award from the Ministry of Culture for his 50 years of promoting lov e for and research about the history of Jakarta. The ceremony had taken place in the Goethe Institut in Jakarta, where the vice-governor 'Ahok' praised him. Heuken had received a document of honor and Rp 50 million, quite a sum of money. There is a filmed interview about his life story, but I still must look at it on the Internet.
Three month ago Heuken had to undergo an operation for an artificial hip, a big piece of metal in his body. He still has problems with walking. He is now 84 years old and one of the oldets Jesuits in Jakarta. His staff is reduced: three for the household, three technical staff for the editorial work. The last work is a facsimile edition plus an English translation of the description of Batavia, about 1940 by a German artist/drawer. 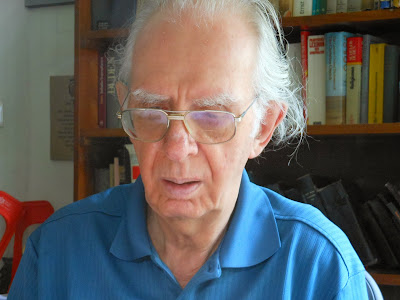 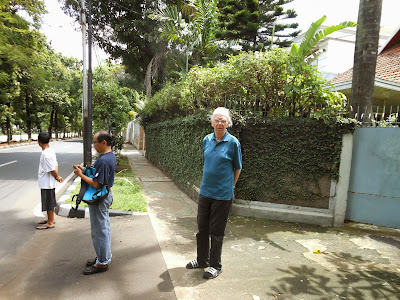 Another Jesuit, Greg Soetomo picked me up from Jalan Ahmad Yamin 37 that morning. I had already met Greg the previous day, because he is enroled in the PhD Programme of the UIN, the Islamic University of Jakarta ans attended my lecture together with some 50 Muslim graduate student and two Protestants who study at the Theological School of Jalan Proklamasi. In the late 1990s and early 2000s I had several times stimulated Stanley Rambitan to follow courses in Ciputata, but he always had excuses: too far from Bekasi, not welcome, because he was nor formally registered as a student. Not there were three. In Yogyakarta the Carmelite priest Bertolomeus Bolong has written his doctoral dissertation under supervision of my good old friend, Burhanuddin Daya on the theme of care for the poor according to Catholic and Muslim doctrines and practices. This is a very welcome development.
The picture here does not give a true image of the house in Menteng: for Jakarta standards this is very luxurious living in such a uiet place, broad street, nice garden, old colonial style house.
Byt Greg Soetomo is, besides his study at the UIN, also the tutor for seven Jesuit students of theology in Kramat VII, in a house that was in the late 1960s and early 1970s used by famous/notorious Jesuit Joop Beek. It is in even a much more grandiose style. Used as a student hostel, because it is close to the premises of the Universitas Indonesia.Greg Soetomo studied philosophy in Jakarta (Driyarkara), but went to Manilla (Pontifical Athenaeum) for theology. After that he was for some time the man in charge of the weekly magazine Hidup. He want to write a special issue about the ASAKKIA, my speeches, autobiography etc. He held a formal interview, we had lunch with the seven young Jesuits: two from Thayland, one from Myanmar, or something like that: an international community Ver easygoing, not really very poor. 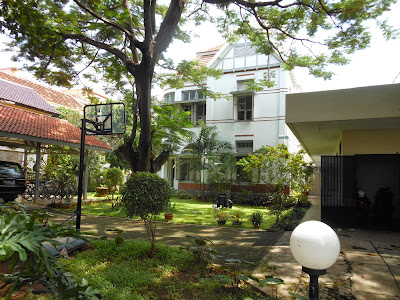 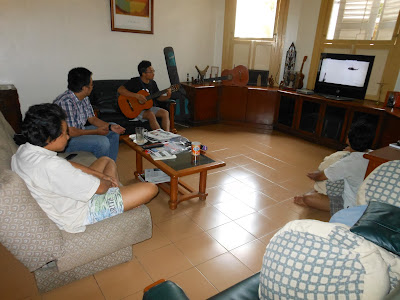 After lunch I went to the book shop Gramedia (in fact more than half of the shop is for selling computer, stationery, but still quite many books too) and I found a nice little girl with a jilbab and a special stand for books by Ayu Utami. I also bought her recent books about Capricorn people (bonr, like myself) between 25 December and 20 January).  In the evening there was a nice Mass in the Gereja Santa Teresia: most people of Chinese ethnicity. 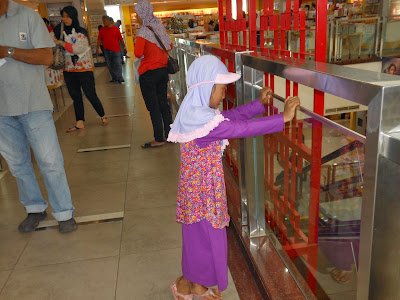 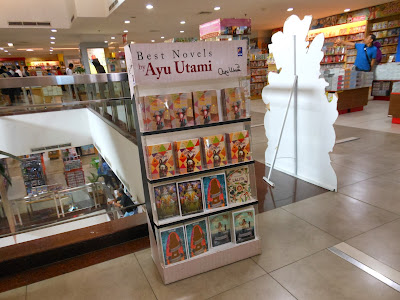