Sunday morning 8 December 2013 I travelled to Kupang for the major goal of this journey, the launching of ASAKKIA, Aosiasi Sarjana Kristiani untuk Kajian Islam Indonesia.
Lion Air was the airline: cheap, but uncomfortable, narrow seats and no food or drinks. But cheap and one can survive. My invitation came from Dr. Fredrik Doeka, who defended in 2011 his doctoral dissertation in Utrecht under my supervision. During the preparation for his dissertation he stayed for some time in Yogyakarta, where he met the OCD, Carmelite-without-shoes, Dr. Bertholomeus Bolong, who wrote his dissertation at the Islamic University of Yogyakarta (UIN) on policy towards the poor by Muslims and Catholics. The two work together in a very nice way. In 2012 they organised a meeting on Christian-Muslim Relations in Kupang where finally three small books were generated: tow about practical problems of AIDS/HIV and trafficking of women to Malaysia and the Middle East. One about how nice it is that other people are really different. The booklets sold very well: in nine months already about 9.000 copies and they could even make some money with selling the  books.
For the Kupang launching of the Association the cooperation between the two is crucial, because both have different networks. Bertho now works in Kupang. 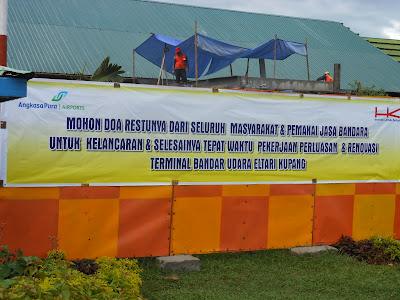 NTT is (nearly) the poorest province of Indonesia and this was already clear at the very simple and even poor facilities at the airport. Visitors are stimulated to pray for the building of the new airport: maybe these prayers are needed, especially for conversion because the local newspapers are full with stories about corruption, in all department. The Ministry of Religion is not excluded from corruption and the former (Catholic) provincial head was now in court for corruption.
Fredrik Doeka and his wife Brendalina were at the airport to bring me to the nice hotal T-more... In the evening we had a dinner in a seafood restaurant, close to the beach, where Bertho was also present. Als in the poorest provinces life can be good! 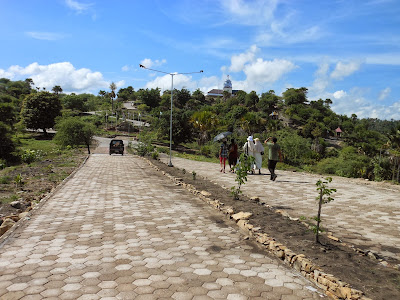 The next morning a student of Fredik brought me to a place of pilgrimage that was inaugurated only two weeks before, 25 November 2013, by a Cardinal, Stanislaw Rylko from Rome and by Archbishop Petrus Turang. The place is in Oebelo some 10 km from Kupang. In West Timor the Protestants are dominating, but in this region quite many refugees from East Timor had arrived and they are also the focus of this great project that was undertaken from 2009 on by Bishop Turang to have a great Catholic landmark in this area. THe pilgrimage start about 1 km from the main road with a welcome aula. Some 100 metre further there is a presbytery, brandnew, now with two young Claretian priests. They are a Spanish Order who worked in Timor Leste and in the 1990s started work in Toraja. This morning we saw Indonesian sisters RVN, Religious of the Virgin Mary, a very old and great order from the Philippines (since 1684), who arrived quite recently in Indonesia and have now also started houses in Kupang. The sisters were here for their first visit. They have a white or grey habit and use the colourful Balinese clothes to keep their formal habit in tact.
Between the presbytery and the major chapel on top ot the hill (dedicated to Saint John Paul II, not yet formally declared a saint, but it will be so next year), there is a road with ten chapels, dedicated to the  Joyful and the Sorrowful Mysteries. While descending one come along the Glorious and the Luminous Mysteries. The last series of five is an addition under Pope JP II in 2002 signalling where Jesus was made known to the public: Baptism in the Jordan, Cana, Transfiguration,  proclamation of the Kingdom and institution of the Eucharist. 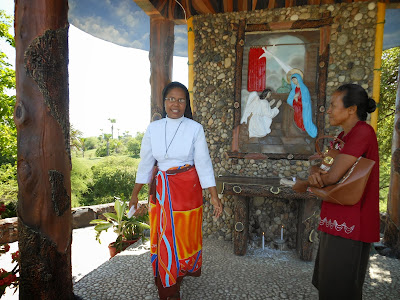 The twenty chapels bear the name of one of the parishes in West Timor. Probably they were funding or at least contgributing to the building. This proves that this is a truly undertaking by the whole archdiocese. 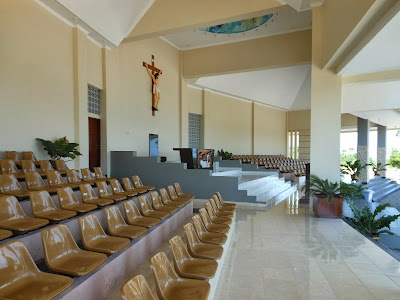 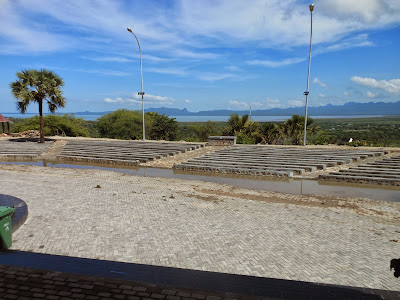 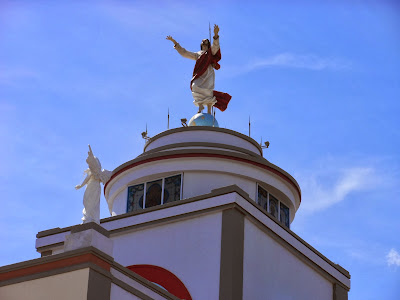 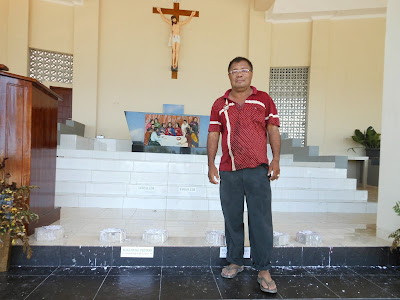 In ordet to build the great chapel and the square in front of it, the top of the hill had to be removed and used to make a greater meeting place. I met a man who as a volunteer was bringing coral stones with a small truck to the top of the place of pilgrimage. He was a trader in kain ikat, the special weaving of this region and made good money with it. But here he worked in dedication for this place of pilgrimage. 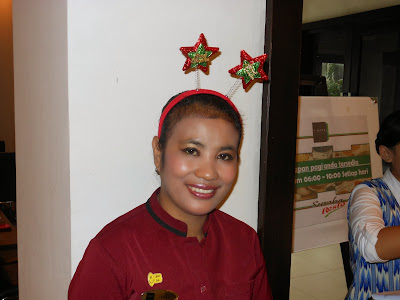 In the afternoon we came together for the first informal meeting. Most of the participants stayed in a quite simple guest house of the GMIT Church, built for visiting ministers. I was the only one who stayed in the somewhat luxurious T-More Hotal. In Jakarta I had seen waitresses with the headdress like horns (antlers) of deer, looking like Sinta/Sita where Rama is hunting. Here in the T-More Hotel some waitresses had the star of Bethlehem as their haiddress, or rather two startes: there was on 8-9 December already ample Christmas decoration.