The 're-conversion' of Ayu Utami

There is a story about a librarian at McGill University's Institute of Islamic Studies who remarked about the late Hasbi ash-Shiddieqy and his numerous writings: 'he can faster write than common people may read!' It took Ayu Utami four years to write the major work Bilangan Fu, but since then it flows quicker and quicker. Last year (2012) there was the second book in the planned 12-volume series, elaboration of Bilangan Fu (Lalita, also a rich and elaborated book with many surprising characters), the second autobiographical (Cerita Cinta Enrico, after Si Parasit Lajang) and the book on Bishop Soegija.

Now there is in 2013 already a third autobiographical book, Pengakua Eks Parasit Lajang or the Confessions of a former single parasite (in the sense of an unmarried organism that lives from a host, whose blood it sucks and so continues living, not truly a Dracula, but close to it; I first translated it a 'a bachelor bloodsucke' but Utami did not agree with this description). 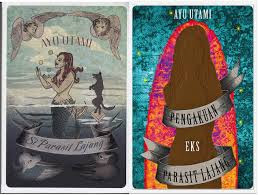 The book is divided in three different parts that are muchmore connected than in her earlier books (or, perhaps, I am now more used to her style of writing and the major figures of her books). In the 306 pages there are 17 + 14 + 17 short chapters, between some 5-8 pages. The first part is about Ayu in the age 20-22, a student in Bandung with her first boy friends. She looses her virginity and becomes quite fond of sex, but keeps control of her body by the 'natural method of birth control, strictly looking after periods and  the short period when pregnancy might start. Part 2 is about her birth until adolescence: much about the sisters in the school, the parish, the two aunts who live in the pavilion in the compound of their house, about her parents. The major theme is that she looses her faith. Part 3 (the longest from 167-306) has the title Seorang wanita di Jalan Pulang. It tells about the various steps (like levens in a computer game) through which she found her way back to Catholic faith. From lust (birahi) she must come to true love (quotes from 1 Corinthians 13), she must destroy the fortress of marriage, patriarchy in society and church, she must free herself from kemelekatan or addiction to many things of daily life, accept the monster in her self and find a balance. On 17 August 2011 she marries Erik. On 21 November she finished the book: on the 1000th day after her father died,, on her 44th birthday and on the Catholic day of the Presentation of Mary in the Temple of Jerusalem. 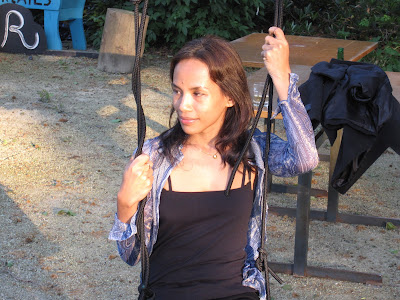 Her marriage is without a choir, without exchange of rings, in a simple style. She was dressed in a nationalist style: white kebaya and red kain. She writes on p. 307 that "A. is afraid that she did not in fact marry Rik, but the persone whose body she eats when she receives the Eucharist." Before this Catatan Akhir she already indicated that she considered marriage as a second Baptism, a second ritual to indicate the religious community where she belongs. Is this a total surrender to one of the six monotheisms of Indonesia? Not really: she remains critical, although less cynical that in earlier books. Marriage was a tanda solidaritas, an expression of solidarity with the Catholic community where she no longer finds ontological mistakes (tidak lagi menemukan kesalahan dalam komunitas kecilnya, 292). It is not 100%, still a spiritualisme kritis (290), but in a positive way.
She does not like the priests, according to earlier statements. They are the bones not the flesh of the community. She likes the biblical stories and the most interesting chapters for me were those about Abraham/Sarah, David and Bathseba. The story of Sarah and Abraham in Egypt is not so well known: Pharao sees that Abraham has a pretty good looking spouse and therefore Abraham declares that she is here sisters. Pharao gives rich presents to Abraham, but he falls ill, because he has taken a married Sarah in his bed. 202: "Probably good old Abraham had a coffee with Pharao and Sarah, with the sad (or bad?) conscience that Pharao had an intimate knowledge of his wife and that his wife knew both men very well.."
It is full with this clear religious meditations, like also some of her short statements: 286 Yesus bukan lolos tetapi lulus (Jesus was not saved but reached his goal). Although she is much closer to common Christian doctrine, she does not repeat traditional theology. She has even nice words for the role of Joseph who had to refrain himself ans stay aside when the Word became Flesh (not bones! not hiearchy) and praises his abstention (282).
In the Catholic Church there is no formal "man as head of the woman" (at least not in the formula of the Canan Law, (she leaves Ephesians 5:23 aside! the pious and peaceful Ayu) and therefore she could marry in this community.
Well,  mister Rik Utami is therefore also included below. But he remains in black and white, because the book is not really detailed about him and his feelings remain somewhat behind. (But in the main book of Bilangan Fu he is rather the central figure than the ladies, so he should not be angry!) He once warned his Yayang that she should behave properly for the future and should not be nakal again. We will see in the next future. 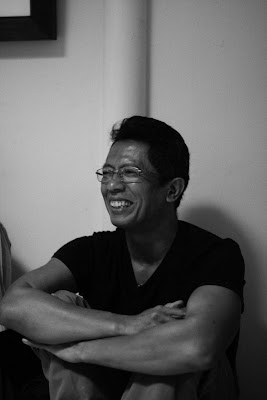 Wonderful: I could order this book easily as an e-book from Gramediana.com. It is a wonderful invention for a reader in Holland so to receive your Indonesian book. Thank you, monster of technology!

Just one last word about Muslim feminism: at the Lissabon conference Susanne Schröter commented about Muslim feminists of Indonesia: Sie sind so brav!  They are so neat, so decent, stay within the proper boundaries of the gentle debates. Ayu Utami has put quite some pepper spray, some eager and nasty spirit in the religious debate of modern Indonesia and it gives it a good flavour!
She has nice words for her first (and quite longtime) lover, the Muslim Rik. He does not use a condom, because in that case you prepare extramarital love and that is not good! During some days when they are in quite excited sexual mood, he takes frequently a full bath in order to cleanse before performing the ritual prayers. He wants to marry A., but she must in that case become a Muslim and she finds it against her feminist feeling: why should the woman adapt to the man and not the inverse. - These are just some of the many interesting and concrete cases of modern Indonesian society that are pictured here with a good sense of humour, in vivid descriptions in a book that I read in a few days, notwithstanding the problem of reading a first e-book from my labtop.

The book is dedicated to Saint Augustine who was the first to right a Pengakuan, 1600 years ago. Pengakuan has the double meaning of Confession as Praise of God/confession of one'faith, but also confession of sin. I have read it also as a process of becoming aku a way to become oneself.
Gepost door Karel Steenbrink op 07:56