Halal food for the MUI!

Recently I have read two books ons contemporary Islam in Indonesia. The first was already for more than two years on my shelves: Andrée Feillard and Rémy Madinier, La fin de l'innocence? L'Islam indonésien face à la tentation radicale de 1967 à nos jours, Paris, Irasec 2006. It has been published too in an English translation. Its theme is the turn towards conservative Islam. The influence of salafi=Saudi=Kuwaiti money and Arab books, the weak government tha is not able/is afraid of taming all these warrior or maffia Muslims. 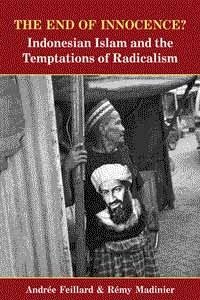 I liked the question, perhaps even more than the answer. What is the problem of modern Muslims in Indonesia. Why does Islam not work? Why are we a second class society? On page 159 I made a note: they feel like described by Wertheim: a majority with an inferiority complex. Abu Bakar Ba 'asyir declared even that the Muslim had become dhimmi in their own country: they do not have the power, do not have the superiority. L'impérialisme des infidèles (176) This is that terrible distinction between we and they, between 'us' and '; the other'. So much a power play, not about individuals, but a group power play.
This is a good and necessary book, but it made me very sad. It is precise about individuals, with nice portraits of 31 individuals. Detailed, also in its analysis of groups and movements. But one wishes that religion could be abolished for some time, let us say, thirty years: the world would perhaps be better! 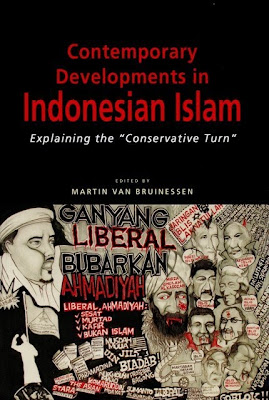 Martien van Bruinessen edited a book on a similar theme: the conservative turn. It is much about liberals versus conservatives or radicals. The first are 'moderate' the second group even puritanical in tghe best way, but perhaps also quite violent.
Doctrine is somewhat more important here, but power is also in the centre. That is clear in the wonderful contgribution of Mujiburrahman on Makassar and a group that wants to implement shari'a: finally they feel that the idea is not 'marketable' and they insist on fight against corruption, which is an easy idea for those who are not (yet) in power and may blame those who are in power.

Quite revealing is the section on Din Syamsuddin and the halal certificate: 73: "halal certification has been one of the chief sources of income for the MUI, along with the certification of Shariah banking". it is not only a matter of the good according to God, but also for one's own pocket!
Also this book is more about the organizations than about individuals, more about power than true convictions and ideals. So be it: may God forgive us!
Gepost door Karel Steenbrink op 11:05