From 2-6 July 23013 I attended the 7th gathering of some 650 scholars who are engaged in Southeast Asian Studies, called the EUROSEAS: European Association of Southeast Asian Studies. I attended several meetings of its predecessor (1989 Bern, 7th European Colloquium on Indonesian and Malay Studies, paper on Raniri), its following conference in Göteburg, with some 100 participants (1990? paper mon Van Lith).
This conference was huge. I arrived early in Lissabon and in the morning I took the opportunity to see the Palácio Nacional do Ajuda. 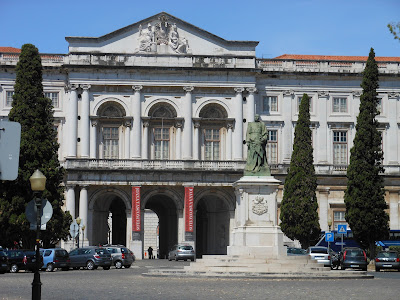 It is a 19th century palace, built for a queen who was a daughter of Vittore Emmanuele of Italy and like to do shopping in Paris and other capitals. The royal system was abolished somewhere in the early 20th century and the place remained more or less as it was, not really plundered, not well kept. There were the luxurious elements of these places like, below, the cruel humiliation of Achilles killed in the battle at Troje (or was it Hector killed?) 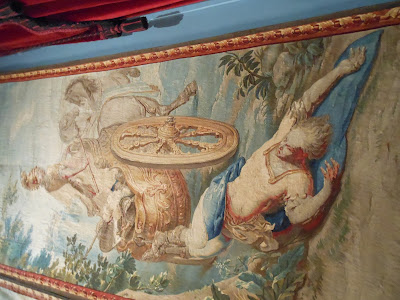 Amidst this old stuff there was a modern exhibition of great objects by Joana Vasconcelos, all made of modern utensils. So, amidst this vanished 19th glory we saw some tables made of smoothing irons. 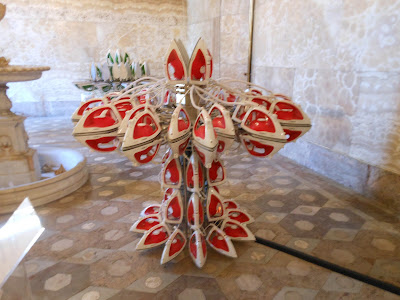 In the great reception hall the old thrones for king and queen were empty. Are they more or less a symbol for the Portuguese nation that experienced a sad Republican period under Salazar and has not yet found its new spirit as a modern and democratic nation? If you look closely you will notice that the giant pumps, placed in front of the empty thrones are made of kitchen utensils, all sizes of pots and pans, just simple cookeware. 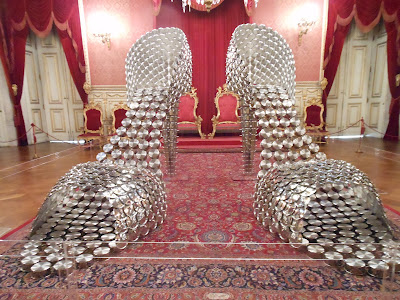 There is in the same great hall and oversized, really gigantic chandelier. Only when watching closely one can see that it is all made from small white tampons. The material is here handled with great care and precision. The past modernized but its modernity is still very close to the presentation of the past and fits, without too brutal or chocking confrontation, although at closer look we can see that it hurts and that this modernity is absolutely different from the style of the palace that could no longer be modernised. 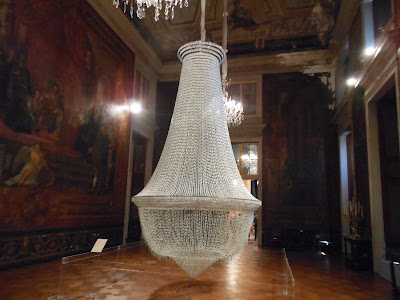