From 2-6 July 2013 the 7th meeting of the European Association of Southeast Asian Studies was held in Lissabon. I had a paper for panel 81. Its theme was formulated as Religious Dynamics in Indonesia between Orthodoxy and Individual Experience. One could it also reformulate as: How the six big religions domesticate/dominate Indonesian religious life. We started with a good survey by Julia Day Howell (Sydney) who blamed PenPres 1965 no 1 of good old Sukarno that formulated the ruling that all Indonesian must be member of one of the (then five) great religions and that it is blasphemy not to follow the directions of these religions. In November 2009 AKKBB, Alliansi Kebangsaan untuk Kebebasan Beragama dan Berkeyakinan (National Alliance for Freemdom of Religion and Conviction) challenged this decision of 1965 with the Mahkamah Konstitusi or Supreme Constitutional Court that rejected in April 2010 this appeal. Since 1965 there is limited pluralism in Indonesia with the ban on mixing and matching religions, and limited free interpretation.
Lia Aminuddin of Kaum Eden has been banned while movements like MQ, Management Qalbu of A. Gymnastiar, ESQ remained close to Islam. Bhakti Nusantara & Bioenergi of Syaful M. Magshri must be seen as a hybrid (and commercialized) construct of sufi traditiona and martial arts had problems to remain formally within Muslim tradition (the later is the subject of the doctoral dissertation of Ahmad Muttaqien in Sydney, he could not be present). 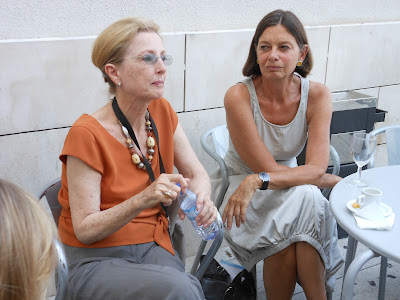 Left: Julia Day Howell, sitting outside (inside it was too dark for photographs)

Second paper was by Kari Tall  from Bergen, Norway who gave a case of penodaan agama or blasphemy by a Sasak preacher Amaq Bakri who claimed a special revelation through the Angal Gabriel and was sentenced one year in prison. Only in 2009-11 there were nationa wide 120 counrt cases of blasphemy where personal religious freedom is very limited, although those 'committing'  blasphemy are not a danger for national safety. Amaq Bakri claimed also that he has short trips to heaven (mi'raj) in 1970, 1976 and 1997 and at the latter occasion received a certificate from Gabriel that he was a good teacher. It did not help! His movement is called Istijenar Rahsa Gunung Rinjani (The Secret Doctrines of Mount Rinjani).
Third paper was by Annette Hornbacher from Heidelberg about Balinese Hindus who go on pilgrimage to India, but often are disappointed because they consider India in general and also the temple compounds as very dirty. They have to pay to enter the major temples and do not feel the religious experience they have in their own temples. This is quite similar to the excperience of Syafaatun alMirzanah who recently was in Utrecht with us and also found Mecca quite commercial, too modern, especially the running between Safa and Marwa resembled more walking in a shopping, airconditioned in concrete buildings, that imitating the spiritual and existantial quest of Lady Hagar. 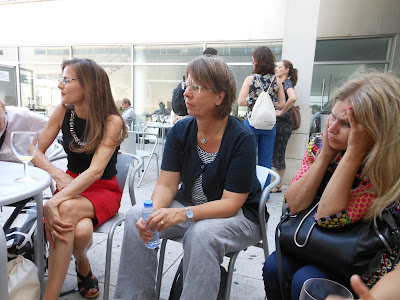 Fourth was Thomas Reuter who showed a nice movie about small religious movements, still popular and active although they preach harmony and even unity of religions. Fifth Isabell Herrmans on the struggle of Kaharingan Dayak/Hindu Religion, only recognized in Central Kalimantan (where the first Governor was the great promotor), but not in East Kalimantan where the Muslims from the former Sultanate of Kutai are powerful, nor in South Kalimantan with it strong Muslim orthodoxy.

Sixth paper was by Judith Schlehe (Freiburg) in commercial new rituals for promoting tourism, in case the cleansing of the grave of Senopati in Kotae Gede (as a Kirab Budaya, much similar to a small sekaten) and bersih desa in Krebet, a touristic village in Bantul: the government officials are not really successful in attracking tourists, but the local population is in part enthusiast notwithstanding the official ban of Muhammadiyah: not powerful enough, even not in Kota Gede. There was even a nice group of female prajurit in the ritual but quasi military parade.
Seventh paper was by Roger Tol on Muslim magazines, about 100 in the country, that are seldom used for research. Al-Falah is the largest (it is free), supporting Muslim philanthropy. Hizbut Tahrir Indonesia HTI is 5th with Tabloid Media Umat. Surprising no 6 is Majalah Gontor: Media Perekat Umat published by the Gontor community of Indonesia. Sabili is no longer so popular: it went down to ranking 11.
Andrée Feillard had a nice paper on the veneration of Sunan Kalijaga in Ngadilangu, close to Demak, but quite different from the old mosque. She did not hear about relations between Ngadilangu and Sunan Bayat in Klaten. 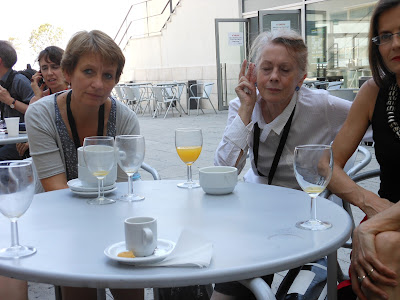 Middle is Andrée Feillard from Paris

Susanne Rodemeier  from Heidelberg had a revealing paper on Christians in Surakarta and especially the Chinese-Javanese Church Keluarga Allah, part of the Bethel Church. Solo is quite an exception: 35-40% of its population is Christian, but there have not been many problem between Christians and Muslims. She started showing the Masjid al-Hikmah standing with a church as neighbour. The formar mayor (Joko Widodo, now Governor of Jakarta) had ruled that all churches or house-congregations which had caused no problem during the last ten years could receive an official status as church and this lead to 138 churches in 2010. The GBI Keluarga Allah is fast growing: from a Chinese Pentecostal Church to a mixed Chinese Javanese Chinese Church where the slogan is: save the lost at any cost. Chinese members give good discount to all church members in their business. They have a cell system with weekly meeting of the 12 members (after the group around Jesus) where members eat together and discuss the paper of a pastor with the most important question: "How Christian am I?" If possible, every member of a cell of twelve should start a new group and the church has giant targets for its near future.
Music is very important in the GBI Keluarga Allah, it may result in trance, kesurupan, not much different from the reog of Ponorogo, that is also used to chase aay evil spirits. This is called 'holotropic breathwork', some kind of hyperventilation, also analyzed by psychiatrist Stanislas Grov. 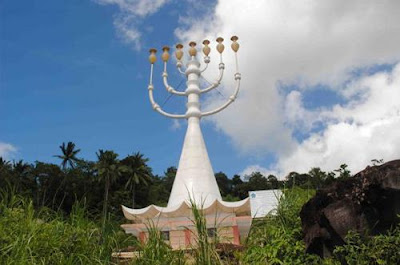 The  tenth paper was by Edith Franke (Marburg), on Jews in Sulawesi.There were always some, but never many Jews in Indonesia. The last known Jewish lady lived a simple old house, used as a synagogue in Surabaya. She died some time ago and the house or synagogue (nothing special) was demolished by a building company. In Manado since a few years a Jewish community under leadership of one Rabbi Yaakov Baruch is active. Under leadership of the present Protestant governor ("we are all rooted in Judaism") a giant menorah is built, some 20 m. high in Manado (or Tondano?). This family from Zwitserland, called the Fontein family, were Catholic, but learned Judaism from the Internet and there are debates about the true Jewish roots and character of this newly found(ed) group of Jews in Manado.
The last paper was by myself on Ayu Utami, but many other pages in this weblog have been written about that topic.
Gepost door Karel Steenbrink op 04:30