On 8 June 2013 Jan Aritonang sent me his autobiography, Dari 60 ke 60. Kenang-kenangan hidup Jan Sihar Aritonang (Ompungtahami - Ompung ni si Aurelia), published as a private book, (untuk kalangan sendiri), 196 pages. I know Jan Aritonang since quite some time: I organized the English translation of his doctoral dissertation with Brill, published in 1994. I was able to hand the book to him in person that year. Between 2000-2008 we were the editors the "Thick Book" the 1004-pages book A History of Christianity in Indonesia, where we both wrote about 250 pages. 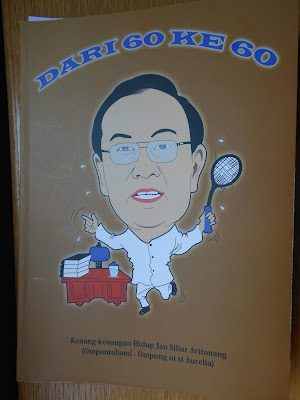 Jan has published several interesting books, on all kind of sects and movements in Christianity; a very precise and detailed story of Christian Muslim Relations in Indonesia, after his doctoral dissertation on education as a basic element in the Batak Churches. And several more!
This is a very personal book: more or less diaries, edited to become a book. It is less about personal reflections than about major events in his life. He was born in the outskirts of Medan, where his father was a small businessman. For one year he was moved to the house of his grandparents in Sibolga who put him in a Catholic primary school. He was eager to learn and therefore his birth date was 'corrected' into 1952, to give him quick access to a primary school. After secondary school he doubted about his vocation in life:engineering in Medan, a career as government official or minister in the church? It was this last option that became reality: in 1971 he started his study at the Theological School of Jakarta, became a minister in Batakland for one of the smaller churches, GKPI, result of a conflict within the big HKBP and in December 1976 he returned to Batakland to serve a congregation. 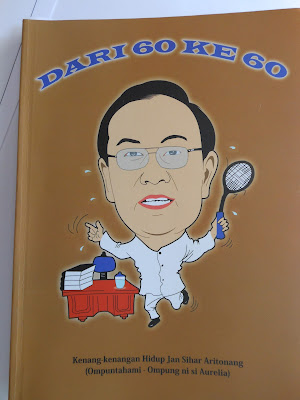 I made two pictures of the cover. This seems the best one. There is a rich choice of photographs in the book
In 1977 he resumed his studies in theology/church history with a Masters' degree. In 1987 he defended his doctoral dissertation at the SEAGST, the Southeast Asian Graduate School of Theology, a body that had an office in Singapore, but staff from various institutions. This was the reason why his degree was not accepted by the Indonesian bureaucracy. In 2000 the same dissertation was once again examined in Utrecht and Aritonang received a second doctoral degree: a theatre play that cost much time and about € 5,000, but it brought him to an official professorship (the third for Protestant theology in Indonesia, after John Titaley in  Salatiga and Gerrit Singgih in Yogyakarta). This formal recognition is necessary for these faculties in order to arrange their MA and Ph.D. Programs: also theological institutions must seek formal status.
Aritonang acknowledges that he is a modest smoker, a resilient drinker of beer (but he prefers a good glass of wine or sherry), an ardent reader, hard worker, good family man, warm and loyal friend.
He is also an honest observer of the true condition of Indonesia. He was so nice not to blame me for the final redaction of our "thick book" where I put the authors only at the end of chapters, sometimes not precisely indicating which section was written by whom: Jan, sorry for this omission!
He abhors bureaucracy and corruption and also is honest about the Protestants within his own school and within the Ministry of Religion of Indonesia. A crazy example of Indonesian bureaucracy was the inventory of the formal diplomas of 14,000 Protestant teachers of religiom. One committee from Jakarta was planned to check all these teachers in the period 2007-2015. Think about travelling, hotels, so many reports, administration and so much money needed for this. About 2/3 did not have the necessary qualifications. The examining committee itself did not follow the required procedures, was not free from corruption and Aritonang withdraw angrily from this miscarriage of bureaucracy (96-7). There are more stories of corruption: within the PGI, Council of Indonesian Churches, YAKOMA (118-9). More than US$ 600,000 disappeared from the account of ATESEA, Association of Theologians of Southeast Asia under directorship of Sientje Merentak (her husband was ill, needed operations, but there were many other elements of mismanagement, 87). It is an honest book, showing how Batak people deal with conflicts.
His straight and honest attitude also brought him several times into conflict with the board of the theological school. The Board wanted to sell the present campus and build a new one: you smell the money disappearing! In October 2011 he left his position as rector of the STT, but had also to leave his comfortable house on the campus and return (at great costs) to a former house, far away from the STT Jalan Proklamasi, in Jakarta where travelling during daytime becomes more and more impossible (102-3). This was the punishment of the board towards a man who worked for the institute more than 30 years! Quite sarcastically he thanks for the flowers: like the Pope also did to the Dutch at Easter, but in a more honest way. 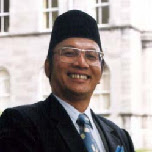 Quite a few pages are dedicated to the difficult project to find money for the theological study abroad (through Ekumindo) and finally to lead the Indonesian Church to a change from receiving to giving, to put money into the own theological schools, basically into education of people.
The personal health problems are exposed in a way that is quite unusual in my own tradition. Even his preference for a simple burial, or rather cremation is exposed in some detail: no big ceremonies, no adat traditions, just a simple memorial session and good prayers.
The three children are mentioned with good details of their study, marriage. The middle one, Tio, received more attention, because of an engagement with a Muslim that was broken (and at that time she came with Aritonang to Holland and we received her several times in our house). Later she married another Muslim and Jan Aritonang feels this as a personal failure and quotes the suggestion by Christiaan de Jonge that maybe in the future she may lead her husband and child to Christianity rather than continuing leading a life of a Muslim. Tio had already some problems with the doctrine of Trinity, but Jan does not give very strong and plausible arguments in favour of this old doctrine (in my opinion the doctrine of the Trinity was a good answer for faith questions of 300-325 within the cultural context of that time, but it is no longer relevant in a time of new views on the start of our world). Thanks to its openness and many details about daily life of a great church leader, this is a fascinating ego-document by this hard worker and pleasant colleague.
I am prepared to join any committee who will prepare a true Festschrift for this scholar, but I am happy already with this document. Thank Jan, Terima Kasih dari Utrecht. Ibu Paule appreciates that she is mentioned also!
Gepost door Karel Steenbrink op 07:25

BlueHost is definitely one of the best web-hosting provider for any hosting services you might need.