The Mission of Development

It was a very short trip: 2-4 December, barely two and a half day in Singapore, for a conference at the Asia Research Institute, ARI, of NUS, National University of Singapore. The theme was: The Mission of Development. Religion and Techno-politics in Asia.
In two days we had some 22 lectures. Most of these were about specific (church/christian religious) organisations or even about concrete projects. The conference, however started with a bibliographic lecture by Michael Feener and Catherine Scheer who presented a broad view of theories on development. 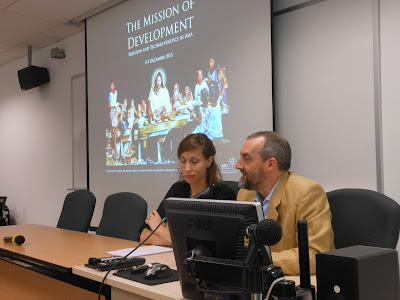 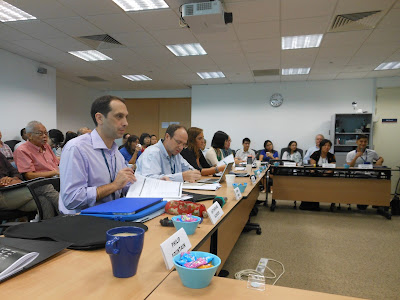 The painting of Filippino artist Joey Velanco of Jesus amidst street children dominated often the room where some 60 people were present for the opening event and the public was always about 50. Scheer and Feener began with the book by David Enkbladh on The Great American Mission or the idea that the American world order (since 1961 Peace Corps) has dominated thinking about development theories and programs. However, the churches had their own strategies and formats: quite different from the key words of World Bank or UNDP, they have a religious language, but also a long tradition, beginning with education programs in the 19th century, but also a background for abolitionism. Besides saving souls they also through about saving societies.
I gave the first day a 'keynote lecture' where I contrasted the long term involvement of churches in education and health care. There were included in the colonial strategies in the outer islands, subsidised by that administration, while for the period 1960-1990 it was more short term development projects, sponsored by European governments. I gave my presentation the title: "Projects, not a plan: Christian Churches and Indonesian Development, 1965-1995". It was in fact a selection of cases taken from the book on Catholics in Indonesia, 1945-2010. 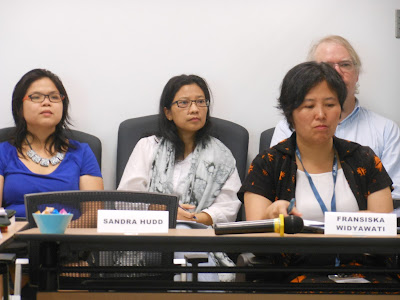 In the middle here is Amelia Fauzia, author of a book on Islamic Philanthropy in modern Indonesia. I included in my lecture also a short section on the need to study about the similarities and differences between Muslim and Christian perspectives and practices of charity and development. Some Muslim organizations took over models of Christian Churches (like Muhammadiyah since 1912: schools with limited religious education, orphanages and health care). The modern development of NGO structures is also in many respects similar. Middle East Muslims concentrate on religious programs, pay more attention to the motives (and religious profits) of the giver.
On the right, back, is the professor of Chinese culture who will take over leadership of the religious program of ARI from January 2016 onwards. 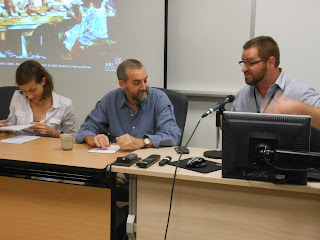 Not only Michael Feener is about to leave the ARI program of NUS, also Philip Fountain (here right), who was also the editor of a recent book on theories of development, including the role of religious movements. Feener will go to Oxford, while Fountain will go to New Zealand, I forgot to which university. 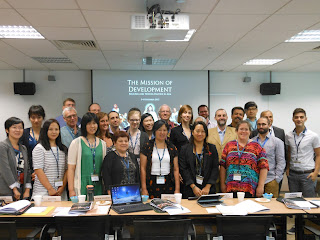 The presenters of papers, staff of ARI as the organizers of the conference.