Missionaries in harmony with anthropologists. The mythological language of SIL and Worldvision

It was a very short trip: 2-4 December, barely two and a half day in Singapore, for a conference at the Asia Research Institute, ARI, of NUS, National University of Singapore. The theme was: The Mission of Development. Religion and Techno-politics in Asia.
It was at one moment quite astonishing for me how serious, objectives and with sympathy even many styles of missionary activities were presented and discussed. 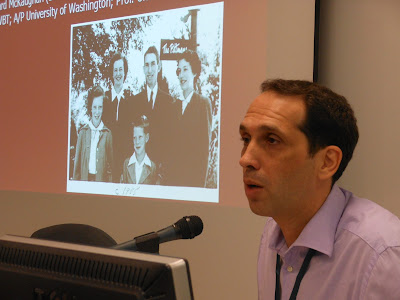 Jeremy Jammes is now in Brunei at the university, but earlier he was in Bangkok and wrote a dissertation on the original Vietnamese Cao Dai religion. He gave an overview of ideas of SIL, Summer Institute of Linguistics in Vietnam. They do work on grammars, dictionaries as preparation for the Wycliff Bible Translators. They often have established good relations with governments. There were here examples of contacts with the president of the Philippines who wrote a letter of recommendation for them to the Vietnamese Prime Minister (Magsaysay to Ngo Dinh Diem). They prefer the small languages of mountain people, the 'unreached'. The idea of the 10-40 Window is one of these more or less mythological frames for their work. In this way they protect the identity of the small ethnic groups, but at the same time prepare the way to conversion. There was another paper on SIL: by Kirk R. Person, working in Thayland (his wife as a teacher in the Palace school!), on the need to start school education with Mother Language Education, before switching to the national language. He mentioned also the 'persecution rank' for Christians and the organization Open Doors. 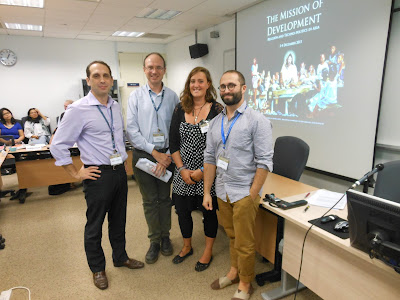 Second from left is Gregeory Vanderbilt, who now works in Yogyakarta, Gadjah Mada university, CRCS  Centre for Religious and Cultural Studies (sponsored by the American Mennonites). He talked about Prof. Ernest Hocking and his Laymen's Inquiry .. which critcised missions for creating a too big gap between Christianity and other religions, but in fact still more about one Japanese  Christian architect and his missionary activities.
Second from right is Noemi Rui who had worked in Jakarta and seen the archives of PGI and found some very relevant cases for this topic. She has material on the PGI and political prisoners (Hidup Baru), but had no time to elaborate on this. In her first part she discussed three cases of development projects. First deception was the removal of a village from two km distance to the shores of Lake Toba: but soon after this move the village was destroyed by a big storm and flood, with many people killed. Second deception was a village in Minahasa that did not like to advertise their vegetables to the market in Manado: they were happy with subsistence they had now. Only a third project was successful. 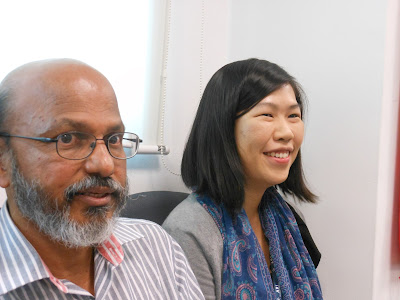 Thay Phoebe Yee and Singaporean/Indian Ajir Hazra work for World Vision in Thailand and Sri Lanka. They work among religiously pluriform society and hope to promote dialogue, harmony and development through non-denomination work where also attention is given to spiritual values. In general this works well. They receive also funds from institutions like the European Union. Incidentally an office was set in fire (like in Sri Lanka), but often they can perform community development. There were not the usual critical questions as to mixing development and chriatity with proselytization/evangelism. 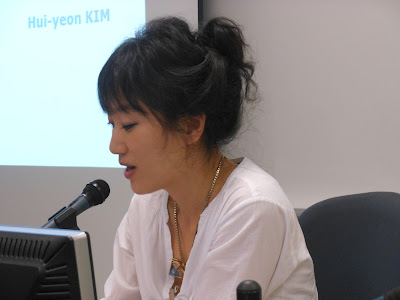 Hui-yeon Kim is French-Korean and won the prize for the best thesis in religious studies in 2012. She studied a Korean evangelical church missionizing in Cambodia. The church propagates that Koreans can win salvation and a place in heaven by giving money to Cambodians. In this way both parties are helped. The Full Gospel Church of Korea works in this way like a prosperity gospel church with special relations between the two Southeast Asian countries.
These are just some examples of the rich program that was presented  at NUS.
Gepost door Karel Steenbrink op 04:10