A kitab jenggot is a book written in Arabic with Malay of Javanese translations under each single word. In this way the text may look like many bearded faces. It was used in pesantren or rather in circles where older people wanted to use Arab books. Now it has become popular with copies of the Qur'an: Arab script, Latin transliteration and Indonesian translation in one package for those who want to read or recite the texts.

Something similar has beendone by the missionary scholar, Bernard Vroklage in the period January-July 1937 when he did his fieldwork in the Belu region of West Timor.

Vroklage spoke Dutch but had three Timorese men who asisted him. The first was A.A. Bere Tallo, who had followed the three years of primary education, and attended five years seminary in Todabelu (West Flores). This man later would become raja (nowadays camat) in Kewar. He had a Belu mother, while his father came from the Marae region. As a youth he grew up in the Belu area and so he could speak this language in the right way. The second was D.K. Faru who had a teachers' training of two years after the primary school and later became fettor of Lssiolat. The third informant/assistant was Petrus Bau. All three could speak Dutch with Vroklage. They listened to ritual texts in Tetum, in the 'priestly' language of special ceremonies. They typed the texts on paper and provided Dutch translations. For interpretations Vroklage also made use of the older missionaries who knew the region since decades. In this way he gathered texts and interpretations of pre-Christian social and religious life in this region, all written down and interpreted by 'outsiders': full outsiders like the Dutch and relative outsiders as the direct interpreters already had become Catholic and educated in the Catholic tradition. 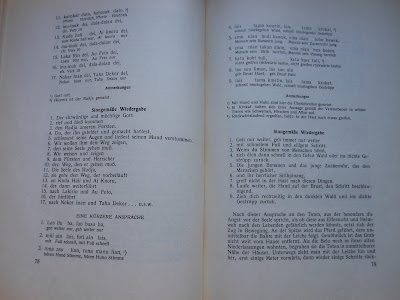 The text first was printed as it was spoken, with translations word by word. Then Vroklage wrote a more understandable text interpreting the meaning of what the ritual leader or traditional priest had said. Besides two volumes with nearly 900 pages of these stories and texts, Vroklage also published nearly 450 pictures in a photographic album of 104 pages. Neatly printed and published by Brill in Leiden. And he became professor of anthropology in Nijmegen. In October 1951 he wrote in this quiet town in the Netherlands on his bicycle and was hit by a car and died, 54 years old (born in 1897). He has saved some aspect of Tetum language and Belu culture. Nowadays we of course question his way of research, working not himself in the culture and language of the people he researched. The data were neatly put into a western anthropological framework. But Vroklage stayed close to facts, gave no strange theories like Margaret Mead in Samoa or Bali. Vroklage had no negative idea about traditional religion, although he wanted it 'supplemented' by the modern Catholic doctrines and practice.
The picture above has been taken from volume II:78-79 and is part of a burial ceremony for a raja:
The  honoured and allmighty God
called and summoned
the Raja, our Ruler.
Thou who created and made him
closed his eyes and silenced his mouth.
We now want to show the way
his soul must go,
our Lord and Ruler
the soul of the Raja,
she may go the way that runs along
Kuda Hali and Ai Knoru
and further along
Lakirin and Au Feto,
that leads
to Nokar Inan and Taha Dekor .. (etc.)
According to Vroklage  the purpose of this and followign songs is to speed the soul to leave the region, because it is a danger for the living people.
Gepost door Karel Steenbrink op 05:54