CMR 10: Christians in the 17th century Ottoman and Safavid Empire

Yesterday I received volume 10 of CMR, the great project on Christian Muslim Relations. A bibliographical history, published by Brill in Leiden, but in fact a programme under David Thomas, John Chesworth and their team in Birmingham.
Again many pages: 715 pages in print with much new and often fascinating information for so many outsiders. It proves here agin that the format for the series is very strong: concentration on biographies of one person and discussion of concrete texts. Christians were old minorities in these regions: Armenians, Syrians, georgians, Greeks and also traders and missionaries, ambassadors, adventurers. The nice format of this great work is that it has a focus on individual persons and their biographies. The great development are shortly sketched in introductory essays, not more than 50 pages.
I give here summaries of only two examples. Pages 319-328 are about an Ottoman scholar, Nuh ibn Mustafa who died in Cairo in 1660. He was a mufti in Konya but then joined a man from his Amasya region to Egypt, where he was teaching, writing and advising until the end of his life. He wrote an fatwa on an ahl al-dhimma or non-Muslim, living in the Ottoman empire who converts to Islam. Is it enough if this persons just recites the confession about the One God and Muhammad as Prophet or should he/she also renounce the Christian faith? He states that Egyptian Christian call Muhammad a Prophet, but add 'he is your prophet, not ours'. So they should renounce also Christianity. But the Zoroastrians (Majusi) of Iraq can recite the shahada and this is enough. He mentions also earlier scholars who  in general accept that recitation of the shahada is sufficient.
He has also a statement about praying: 'If an infidel prays salat in a Muslim congregation, the agreement is that he be considered a Muslim, for this kind of worship is exclusive to the umma of Islam.' This was my practice in the pesantren of Gonto in 1970-1 with a permit of Kiai Imam Zarkasji and so we debated whether I was legally a Muslim or not?  Fortunately later Nurcholis Madjid came with a distinction of Muslim as 'someone who surrenders to God' and muslim (no capital!) as member of a spcific community/congregation. Wa'llahu a'lam bissawab! 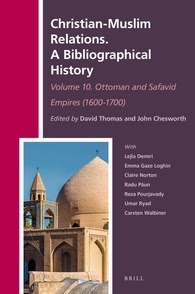 From the Persion Empire of Safavids there is an entry about Baha' al-Din al-'Amili (1547-1621). He was from an Arab family of South Lebanon. His father became a scholar in Herat, while he himself became the most important religious scholar in Isfahan. he discusses  the question whether Muslims may eat the meat slaughtered by Christians. Although Qur'an 6:118 allows this, the answer is negative, because 'Christians utter the name of God with reference to Christ or to the 'father of Christ' while Jews will refer to the father of 'Uzayr/Ezra'.  (511). Like in the Indonesian interpretation of a Muslim man marrying a Christian wife, also here the fear of the 'other' is stronger than an explicit text of the Qur'an: human fear stronger than the Word of God.
Gepost door Karel Steenbrink op 00:56