Today, 29 August 2012, we celebrated the doctoral examination of Hilman Latief in Utrecht. The cover of his dissertation shows PKO Muhammadiyah (Penolong Kesengsaraan Oemoem)  or charity organization of Muhammadiyah at a rice distribution, probably in the 1920s or 1930s. 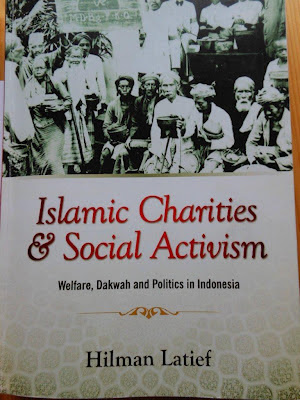 This is a very rich dissertation: many facts, especially from the last 15 years, suggestions for various interpretations, personal observations. The book has a large number of organizations: Muhammadiyah, Nahdlatul Ulama, Persis, DDII as the older ones, but many recent developments. After the introductory and more general chapters, chapter 4 concentrates on health centres for poor people, many institutions while Muhammadiyah Hospitals and clinics still are the leading ones. Chapter 5 is on activists  defending women's rights. Chapter 6 is the result of fieldwork in Nias, where some muballigh or da'i from outside the island have settled and concentrate on activities in mosques and small prayer houses, instructing children how to pray. Chapter 7 is on the attention given by Indonesian Muslims to international affairs, like war in Afghanistan, occupation of Palestine. Chapter 8 has some general conclusions. 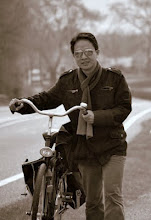 One conclusion was challenged by Birgitte Meyer at the oral examination. On p. 312-3 it is stated that traditionally zakat is given from person to person. Nowadays even rich people donate some 5-10.000 Rupiah to poor people who line up by hundreds. When charity is given through organizations and not through individual benefactors directly it is neutral: not an imbalance between giver and receiver. 'It is within this context that charitable associations, in the form of collective action, can diminish this psychological dimension.'  This sentence is not absolutely clear, but it wants to explain that people will feel easier and free to apply here. This is what happened in the Dutch system when in the 1960s poor people received the right for government allowances. The same is, however, not the case with Muslim organizations. Latief even gave a nice example of Muslim charities that distributed rice to people, but women had to use the veil at the process of application. Some of these women immediately after receiving their share, took of the veil! Also here there is not true reciprocity between giver and receiver!

I concentrated on chapter 6 in my questions. The majority of people in Nias are Protestant, some 25% are Catholic and few are Muslim. This was the reason for sending Muslim missionaries to the island. It was not a competition between various organizations, but I had the idea that here the 'giver' took the decisions, not the Muslims of Nias themselves. A first preacher was some Qaimuddin , probably born about 1970 in Flores. In the 1980s he was in Bangil for the pesantren or Muslim school of PERSIS. He had a career as preacher in many places: 1. in Ampah (Central Kalimantan); 2. Raha (Sulawesi Tenggara), with a local foundation for one year; 3. with asistance of PERSIS he helped muallaf in Flores for 2 years and 3 years financed by a Quwaiti foundation. 4. Then he was in Buleleng, North Bali with a Muhammadiyah organization; 5. Again in Flores he was involved in politics and even received a seat in the local parliament for PBB, a Muslim party during the 1999 elections, but he did not take his seat, rather moved to 6. a freelance position in Jakarta and finally 7. to Nias for a proghramme of AAP, Al Azhar Peduli. (Latief 235-7)
These preachers only receive a low salary, stay often in a room attached to a local masjid. Their education is not fit for development work, because their education concentrates on Arabic and Quranic Studies. They like Islamic Banking, but another informant for Latief was a member of the Catholic Credit Union in Nias, because there was no money for things other than dakwah or direct preaching.  On page 252 the charity is defined as "Progress in this region means the ability to provide local people with wider access to education, particularly Islamic education." In fact often not much more than chanting the Qur'an.
Gepost door Karel Steenbrink op 08:44