Ayu Utami was in the Netherlands in May 2012 to introduce her latest book, Bilangan Fu. In an interview she emphasised the three main parts of her book, summarising the three dangers of our time: Modernism, Monotheism and Militarism. Modernism has destroyed our naïve and innocent view of our world, annihilated our ability to see miracles. Monotheism has reduced the rich variety of spiritual ways to six only, the officially recognised international religions of Islam, Buddhism, Hinduism, Confucianism, Catholicism and Protestantism. And these great global religions are especially damaging the rise and development of true spiritual life when they express themselves in a fundamentalist way. Militarism is presented in a somewhat nuanced way: not all military are bad people. They are very powerful and so it may be wise to seek the cooperation of good officers and try to do good things with them. This will not work always.
The central themes of the book are religion and mountain climbing: in one interview (with detikNews) Ayu Utami compared the two: both want to reach the summit. Both can be abused if they are not used in the right way, so there must be clean climbing.
In this book a group of mountain climbers is divided over the issue of ‘clean climbing’. Can you climb a mountain without hurting him/her with nails and other instruments that are needed to safeguard the climbers? Main character as the I person, the story-teller is Yudha, member of a group of urban people who like rock climbing in the Gunung Kidul Mountains of South Central Java. We meet a number of people of this region: the village head Pontiman Sutalip (just the inverse of Pilatus!) cooperate with the military who want to cut the fine jati trees and start mining that will pollute the environment. The great opponents in this process are the traditional cultural chief, called here Semar and some Suhubudi, leader of a distinct spiritual movement. His adopted son Parang Jati (found, without a father: with the treats of Jesus, but possibly to be identified with Peter, because his name means rock) supports his father in this process. Another ‘found’ son is Kupukupu (Butterfly), also called Farisi, because he looks like a Middle Eastern (Persian, Parsi?) man with his long white robe (also for Catholic priests?). In the Dutch translation by Maya Liem that I use, his name is written Farisi, for Pharisee? (354-355) 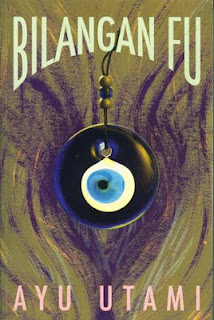 There is regularly a surrealistic being Sebul that is quite sexually exciting (Javanese for a powerful blowing; it is explained as an instrument of the Asmat people of Papua who play on some kind of flute that is called a fu). He/she explained the number fu in the strange formula: 1:a=1xa, but a is not similar to a. In an interview with detikNews Ayu Utami explains that monotheism started before the idea of zero was introduced in our cultures. So, we must create our critical monotheism or creative spirituality.
The saviour figure of Parang Jati, together with his father Suhubudi want to have a spirituality that acceptes the southern ocean as a goddess without neglecting the formal Muslim prayers. Parang Jati has six fingers on each hand: 12 is more perfect than 10! Parang Jati is circumcised at the age of twelve and his father wanted to that he should live in celibacy, but that is (initially) rejected by the son. However, there is no spouse for Parang Jati. 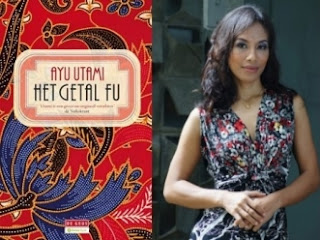 Yudha, the telling figure, may be explained as Judas (p. 17), but I thought that we also may see this as some element of the Bharatayudha, the great fight between the two related families (as cousins): Pandawas versus Korawas. Do we here find a struggle between Kupukupu and Parang Jati as representatives of everything that is wrong with modernism, monotheism and military versus a true defender of the right way?
The book has many references to biblical passages, that give it a more or less religious flavour. In the first part one chapter has the title Sermon on the mount and it has many direct quotes from the gospels. Parang Jati says that he has come with a sword Matthew 10:34,  I did  not come to bring peace , but a sword (therefore I supposed first that Parang is used in another meaning of the Javanese word, a dagger or sword, p. 89). On p. 91 the Sermon on the Mount starts with an ecological variation on the beatitudes: Blessed are the meek for they will leave the earth intact (instead of: they will inherit the world, Matthew 5:5). That chapter ends with John 20:29 Blessed are those who have not seen and yet have believed.  This may for this moment be the last remark: there are many more biblical quotes to be commented upon, many more interpretations to be mentioned. While reading it was for me an Indonesian counterpart of the fantastic magico-realistic novels by Haruki Murakami. Because of the biblical references and the notes about recent Indonesian political and cultural history it was even a much more lively experience.
Gepost door Karel Steenbrink op 08:56