Religious Minorities in India and Indonesia

On Thurdsay 31 May I attended a meeting in Utrecht on the theme Believing in the House of the Other. The idea was that Christian minorities have sometimes a difficult time in the house in Hindus (India) and Muslims (Indonesia). There were about 40 people present, from development organizations like ICCO, Cordaid, Islamic Relief, TEARS, Mensen met een Missie (Catholic Religious Orders, CMC or Centraal Missiecommissiariaat in earlier decades). I was invited by Dr. Kees de Jog and his wife Tuti, working in Yogyakarta but on visit in the Netherlands. 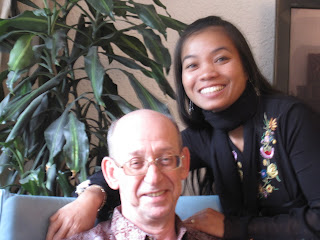 The first speaker was Radj Bhondoe, for a long time, consultant with Cordaid, the Catholic Development Organization, but now president of the Hindu Union in the Netherlands and also with a Hindu organization. He blamed the media in the West for giving so much attention to aggressive acts by Hindus and not by Christians. India and Hindus in India have given shelter to Ahmadis who fled from Pakistan, to Zoroastrian refugees from Iran, to Buddhists from Tibet. So, Hindus can be very tolerant and helpful. In Orissa some time ago a Christian missionary, working for lepers, was killed. But the press does not mention that this also was active in conversion work, not following the rules of Indian society that one has to respect other religions. Of course, this killing cannot be defended. But, when two years later a Hindu Swami who built primary schools in Orissa was killed, the Western press remained silent. 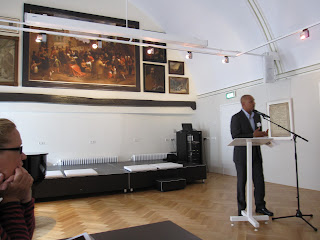 Above we see Radj Bhondoe talking in front of a maedieval painting of the seven works of mercy, in the main hall of St. Batholomew's Hospital where the meeting was held.
Bhondoe also stressed that much money given for the fight against leprosy to Sister Teresa, was not spent for medical puporses, but for missionizing. Swamis who fight against leprosy also are less successful in finding funds in Western countries. 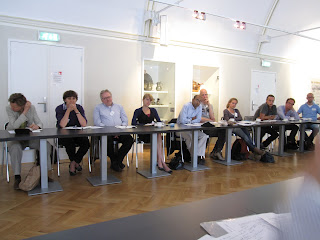 Second speaker wasJason Fernandez from Portugal, now working on his Ph.D in the UK. He talked about the grammar of secularism in India. To be clear: in India secularism is not understood as neutrality in the field of religion or even opposition against religion, but as a very positive value, more or less like pluralism. A secular society given opportunities to all religions. He showed how cast, gender, class is interwoven with religion in India and even how the use of one's language has to do with a religious and social position. 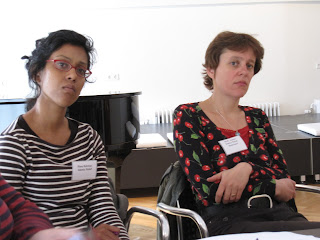 The two ladies representing the Islamic Relief. The one in the left is probably Surinam-Muslim, judging from the name of Rahman. The one on the right looks like a non-Muslim, but still is an official in this organization. About language and denomination!

Jasper Slob gave an overview of the situation in indonesia (in ten minutes only; this was more a short conference of orientation than a thorough debate of practical problems). He sketched the situation of Christians in a transition from first class citizens (due to colonial privileges, better education, high position in the bureaucracy) towards second class citizens, because now they have often less right than the Muslim majority. Salafi Islam is growing, but among Christians aggressive preachers are also more successful than moderate classical churches. 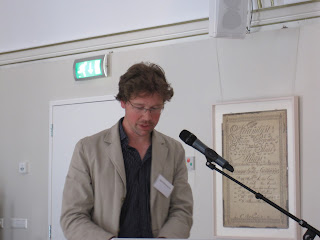 Last speaker was Ward Berenschot, who wrote a dissertation on Muslim-Hindu conflict in Gujerat, India, but also has experience about field research in Indonesia and now has a research position at the Leiden Research Institute on Indonesia, KITLV (by the way: the Maluku Museum in Utrecht must close due to financial problems and lack of political support. Its collection will be brought to KITLV in Leiden).
Ward Berenschot pictured how Pancasila now again is popular with liberal Muslims and Christians. In the late Soeharto period it was identified as a cover up for political oppression (Pancasila wants harmony, no opposition). Now Pancasila again is the banner fro defenders of pluralism.
He promoted that development organizations should not neglect religious issues, because they are so important in countries like India and Indonesia. Human rights, gender equality, economic progress: it all has a religious dimension and that must be taken serious by all people who want to promote a better and just society.