Mantan = former: Rehabilitation or deradicalisation of some 120 ex-terorists in Indonesia

Last month, 25 February 2018, in Hotel Borobudur, the splendid place on the northern side of the Lapangan Banteng square in Jakarta, a special meeting took place: 120 ex-terrorists offered their apologies to several score of their victims. The terminology of mantan (meaning 'former') was used. It was the conclusion of a process of several days, where culprits and victims lived together in the luxurious hotel. They were involved in the Bali bombings (2002 and 2005), the two attackls on Hotel Marriott in Jakarta (2003 and 2009), the Australian Embassy (2004) and the great shopping centre Sarina (2016), a building from the Sukarno period.
In my youth, the 1960s,  there was much debate about de-radicalisation, or how to change the minds of radical and (sometimes) violent people. At that time it was the New Age movements like the Moonies (Unification Church), Hare Krishna,but also leftist groups like Baader-Meinhof, Rote Armee Fraktion. And often the mild terminology of 'brainwashing' was used to reduce their guilt or responsibility. It proved to be very difficult to change the mind of what were considered victims. 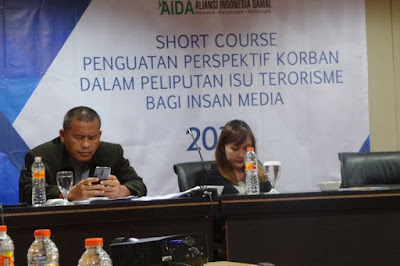 The major therapy at this event in Jakarta was the direct meeting or even confrontation of culprits with their victims. Not everybody was happy with the result. The Indonesian newspaper Kompas had on 28 February a very positive report, showing in a picture ex-terorist Ali Fauzi, bomber in the first Marriott attack of 2003. However, the Dutch newspaper De Volkskrant had interviews with two Dutch men who had been in the Jakarta meeting. At the final meeting there was a short movie, showing culprits and victims loughing, keeping should by shoulder like in a carneval-like dance. One Max Boon (who lost two legs at the second Marriott attack of 2009) said: 'This is some kind of cheap and painful theatre. It is impossible to heal the deep wounds of the victims and the dangerous ideologies of the perpetrators in just two or three days.'  AIDA, the Alliance for a Peaceful Indonesia said that they had tried to reconciliate 27 victims with four cultprits in three days. We should have taken many months for this. But the origanizers were already happy that a quite large group of victims and culprits had been in the same place for several days. A token of reconciliation for the whole world.
Gepost door Karel Steenbrink op 08:48