I found it often complicated to understand Wilfred Cantwell Smith in his debate about (personal) faith and (institutional) belief. In the Indonesian constitution two words also are debated until now. Article 29 states that there is 'freedom of religion and belief' (Negara menjamin kemerdekaan tiap-tiap penduduk untuk memeluk agamanya masing-masing dan untuk beribadat menurut agamanya dan kepercayaannya itu.). Perhaps they were meant as identical, because these solemn texts often have repetitions.
In the decades after 1945 there has been a growing consensus that agama or religion should be taken as a world religion, in fact restricted to five: Islam, Hinduism, Buddhism, Protestantis and Catholicism. Later Confucianism was added.
Kepercayaan or 'belief' was reserved for local spiritualities and aliran kepercayaan indicates most often the traditional or even modern Javanese 'new religions' or spiritualities. In the 1974 Law on marriage it is defined that marriage is only valid when celebrated/administered according to the religion of the couple. Civil marriage was until the 1980s still possible, but has gradually been banned. Also in other cases (like getting a passport, an identity card, a driver's licence; insurance for your car or motorcycle) one of the 5/6 religions should be mentioned. 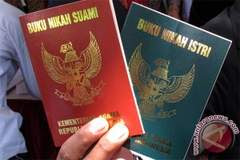 In early November (6 or 7) the Constitutinl Court took a short but firm decision: Mahkamah Konstitusi memutuskan bahwa "negara harus menjamin setiap penghayat kepercayaan dapat mengisi kolom agama dalam Kartu Tanda Penduduk (KTP) dan Kartu Keluarga (KK)". Or: the constitutional court takes the decision that the state has to guarantee that members of a spiritual community are able to fill in the column of religion on their identity cards and in the marriage books.
Immediately the question arose whether this will also diminish the monopoly of the six big religions in the field of civil administration, give more freedom to individuals to abstain at all from any religion (or fill in: 'atheist')? What Ahmadiyyah people: should they be free to fill in that they are Ahmadiyyah, but also Muslim? We will see further developments perhaps.
Gepost door Karel Steenbrink op 04:59