The Boxer Codex on Muslims of Brunei

Charles Ralph Boxer (1904-2000) was a Beritish colopnial historian, who wrote solid but often also well-written and pleasant books about Portuguese and Dutch colonial history. Around 1960 he bought at an auction a manuscript from about 1590 with many fancy illustrations about the whole of East Asia, from China and Japan to the Philippines and Indonesia. It wass in 2016 published in its original language, Spanish, with an English translation and many footnotes.Chapters 8-11 are about Brunei, the Moluccas, Java and Aceh. Most intyereting of these is the chapter on Brunei, 397-426. The sections on Java and the Moluccas are extremely short, not much more than one page about the ruler and the dress used for fighting. 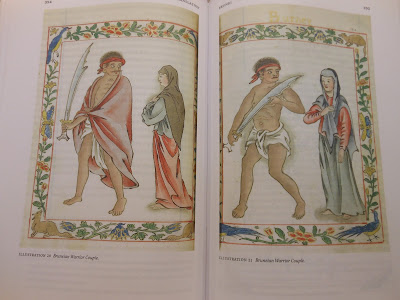 The thirty pages on brunei begin with a history of the arrival of Islam in Brunei, which was about 1300 according to this source. One Sultan Yusuf was the first to accept Islam. He went to China to visit the emperor and received a consort, a Chinese Pricess, also known in Javanese history as the spouse of one of the rulers.
Quite interesting for me was the meaning ot the word Orang Siak, which I knew as an expression for a santri, a Muslim student. Here it is explained as a Shaykh, venerated older man who was teaching religion.

Quite funny is on page 411 the story about the sultan who is sleeping with his one real spouse or isteri sungguh in the same room as his many concubines. Because they all sleep in the same room. When the sultan seeks the company of one of other other women he goes to her sleeping place and 'there he does whatever he wants without his wife scoulding him or her'.  Pure harmony, although many stories tell about problems in polygamous relations especially in the royal families. But this is only a Portuguese account of the situation as they heard or imagined the lives of these quite different people.
Muslims here are not qualified as 'Moor' but as Islam 'who do not eat pork and follow the Koran'. Moor is often only used for Mediterranean Muslims and here they are apparently different. But the description is very short and I could not yet really see what is the use of an outsider source for our knowledge of Indonesian Muslims.
Gepost door Karel Steenbrink op 12:49