The Arab King and the Balinese Priest Venus

King Salman of Saudi-Arabia has made an Asian tour, ending in Jakarta, then Brunei and finishing with a holiday in Nusa Dua, Bali.
In Jakarta some people were somewhat disappointed: he did not give a speech of 10 minutes in the national parliament, but spoke only 2 minutes. He did not sign contracts for US$25 billion but only for one billion. People of the FPI, especially Habib Rizieq Syihab were disappointed because he did not give open support to Muslim hardliners and the Arabs of Jakarta. Instead, he spoke in favour of a 'moderate' Islam and some espect that the position of Jokowi (and Ahok) against the hardliners has been strengthened. On 3 March there was a meetng with a large number of religious leaders, including Bishop Suharyo of the Catholic Conference of Indoensian Bishops and Jesuit Magnis Suseno, who mentioned this meeting as a strong symbolic event, stressing the need for interreligious harmony.
King Salman promised in Jakarta money for three centres of learning Arabic in Medan, Makassar and Surabaya.
But he arrived in Bali on 4 March in grand style and extended his holiday from 4 to nine days. 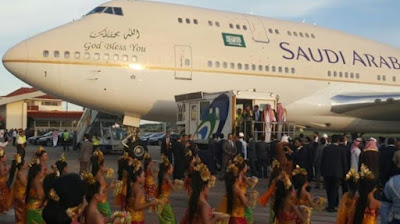 He will probably know that English is much more practised and loved in Indonesia than Arabic. So his plane has God bless you, besides Allahu bi hafdhikum!
Many newspapers had the story of the diocesan priest Eventius ('Venus') Dewantoro, born in Larantuka. He stayed for one year in Cairo to learn Arabic (2002-3) and after that two years at PISAI, the Pontificaul Institute of the Study of Arabic and Islam in Rome. He greeted the king with a nice Ahlan wa sahlan, whereupon the king asked whether he was a minister of the Masihiyin. The short conversation brought him to the front pages of many newspapers. Further they wrote that the beach was under security, but still open for divers and other guests. 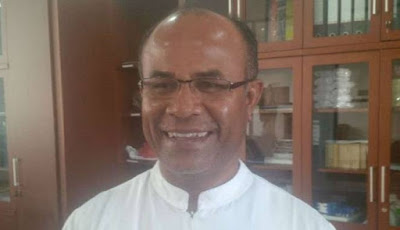 'Venus' Dewantoro here enjoys his moment of glory!
His name is also written as Evensius (born Riangkemie 2 May 1969. Ordained in 1996). In 2001 he was the parish priest of Ampenan in Lombok.
Gepost door Karel Steenbrink op 12:22

Get professional trading signals delivered to your mobile phone every day.

Start following our trades today & earn up to 270% a day.