Two days ago we received the astonishing message that at the age of 66 years Ismed Natsir had died.
His health had deteriorated in the end of last year: he had some kind of stroke, problems with talking, moving. But his memory was OK, and his spirit still bright.
To most of us he is known as a brilliant editor. First of all the diary of Ahmad Wahib, but many other writings, a continuing stream of books went through his hands, his computer. Humble, not seeking glory for himself, but serving the great ideas and all those many people who wanted to promote this. 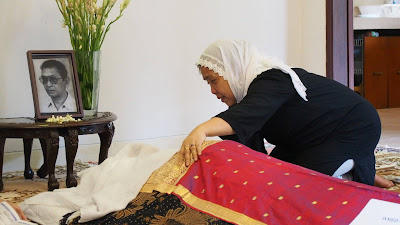 Ismed wrote also poetry: probably this is the best known

In the sea an oyster
in the oyster a pearl
in the pearl: oh, nothing at all
in  my clothes: it's me
in me my heart
in my heart: oh, nothing again
in a poem we find words
in words is meaning
in meaning we hope to meet You