Judas, Jesus and stories of a dog

Simon Rae has sent me from Dunedin in New Zealand a book in return for something I sent him. It is the book by C.K. Stead My Name was Judas. It is nice reading because it is written by a poet, a professor of literature. It depicts the life and times of Jesus of Nazareth through the eyes of Judas, a friend in his youth. Single son fo rich parents while Jesus grew up in a poor family with many children in the crowded and small house. In a nice setting it has much bibliocal archaeology and history. On p. 30 he writes about the Romans in Palestine: The soldiers who had served a long time in our region were very unpleasant, as if they'd learned to dislike the local population whom they regarded as ungrateful, unwashed and potentially rebellious. The more recent arrivals, especially if they were young, were friendlier. I wondered whether this is true. In the other colony, the Dutch East Indies, the totok or full-blood white new arrival is often cosidered as someone who is still embedded in the European culture. The indo or Eurasian could be closer to the 'native' population but  in fact was a  distinct category. 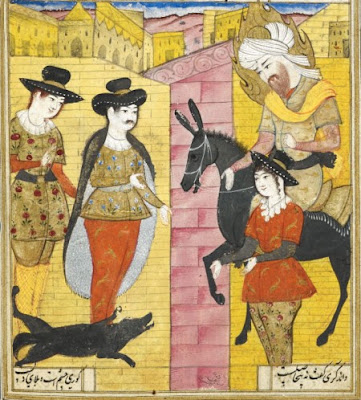 Sent walking by their teachers the two young boys Judas and Jesus meet a  pack of wild dogs. Judas was afraid, Jesus not, or at least, he was calm. Jusad took his staff and chased them away, hitting one dog so serious that he lay wounded. He finished him with a blow to the head.
This reminded me one of the Muslim stories of Jesus as retold by Tarif Khalidi in his beautiful book, The Muslim Jesus. Jesus and the pupils came along a dead dog. The disciples said 'How foul is his stench!' Jesus said 'How white are his teeth!' He said this in order to teach them a lesson- namely tot forbid slander. (no 127 out of 303, page 122).
Gepost door Karel Steenbrink op 01:20