Salafi and Da´wah activists to be converted at Radboud University, Nijmegen

This is the third report of a seminar at Nijmegen, Radboud University, 30 May 2016.
After a good lunch and some further individual conversations (important: we come together not just to listen to papers!), there was a third session. 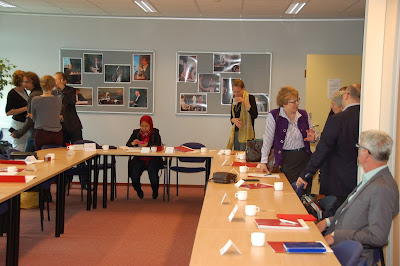 Martijn de Koning is a researcher in Nijmegen in the field of Salafi activists. Now he likes to call these activists as protagonist of Da'wah. They prepare actions in a detailed way and after action they observe and stimulate the media covering of what they did. In fact terrorism had as goal to make people anxious and nervous and this is mostly not through the terrorist attack per se, but by the media covering.
After actions in Azerbayjan, Pakistan/Afghanistan, Chechnya (where activist could not really be involved in fighting), ISIS in Iraq and Syria could give activists from Europe a chance to do something in the battle field itself.
De Koning makes a distinction between three narratives: the apocalyptic, martyrdom and jihad as legitimate violence. De Koning had some forty contacts but his sources have dimished quickly in the last year. Some ten are in jail, some 15 killed in action in Syria, and most of the rest have left the ideals and became inactive. 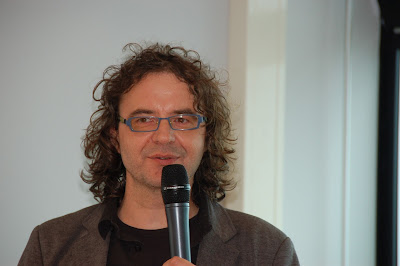 Martijn de Koning himself loooks more or less like a happy jihadi.
There was also a presentation of the team of the Ministry of Social Agffairs of the Netherlands, where people give trainings in methods to identify possible extremists or radicalized people. They published an Action programme for integral approach towards jihadism. It is a booklet of 36 pages, which is also available on the internet: https://www.rijksoverheid.nl/documenten/rapporten/2014/08/30/actieprogramma-integrale-aanpak-jihadisme. The team cosists of 12 people who give courses and training to teachers, social workers.
Identifying possible radical citizens is difficult, more difficult is even to keep contact and try to prevent their trip to the battlefield. They also have a website: www.socialestabiliteit.nl.
One point of discussion was the 'poor knowledge of Islam' among people wanting to do something for Muslims. Not the objective knowledge, but the self-understanding is important.

It became clear this day, that encounters with radical Muslims arwe the most difficult field to do and to formulate as a strategy. Nevertheless the Dutch and Indonesian experts who came together this day plan a research proposal for the European Research Council in this field and hope that it may support their cooperation in the years 2017-2020. 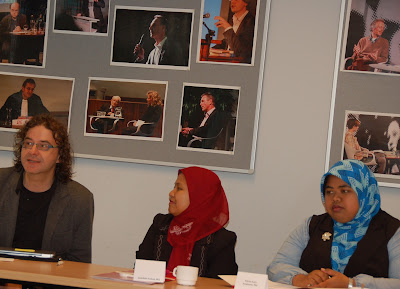