Frans Seda Lectures. Democracy as as way to designs one's own life and spirituality. Ayu Utami in Tilburg.

9 June 2016 the Frans Seda lectures were held (or should I say: celebrated?) in Tilburg, where he studies economy between 1950-1956. The series was initiated in the early 2010s. As a student of economy in Tilburg Frans Seda was really integrated in Dutch life. In his parish ha was a president of St. Mary Sodality, of the Saint Vincentius Society for the poor, but also of a students'  dispuut. The dispuut is a group where every year some 10-30 students become member. Also after graduation the alumni remain member of a dispuut. Besides informal meetings, lectures and festives meals, a dispuut also has social activities. In this case the Frans Seda Foundation was started from this group of alumni. I heard that one member of the dispuut had owned a vineyard in France, sold it and donated a quite substantial amount of money to the foundation.
The Frans Seda Foundation brings yearly some twenty young scholars (mature students, doctorandi) together. In 2014 I gave a talk at their meeting in Sint Michielsgestel under the label of "The Ten Utopias of Frans Seda" (it is found under ma postings at academia.edu). This year the theme was "the rise of democracy".
I gave a talk about the period 1900-1940, when education in Flores was spread by the Catholic missionaries, their pupils in the first five schools of Larantuka, Lela, Sikka and Maumere. I saw the life of Frans Seda, but also of many teachers as a way to realize a new design of life, travelling to otyher places, findings new jobs like pearl fisher, teacher, police officer, government official, member of the army, often outside Flores. Many of these teachers had to create respect for literacy, call pupils to schools, but they often found other jobs, opportunities to develop their personality.
Gerry van Klinken sketched the difficult development of democracy in Flores in the 1950s and 1960s. Jan Djong was for him a true star in the fight for more democracy against the rather authoritarian rule of Dom Thomas of Sikka. We know how much opposition he had to withstand and finally, in 1966 he was killed not because he was a terrorist or a communist, but because of the local politics that took opportunity of the army that sought victims. It caused in total the killing of at least 800 and perhaps even 2000 citizens in the region East of Maumere. 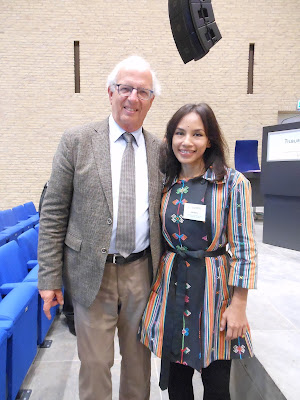 Ayu Utami took much interest. Quite many Indonesians living in the Netherlands, had come for her. She continued her crusade aginst the (too) great influence and rigidity of the global, international religions in Indonesia and held a strong plea for more individual and personal pity, spirituality.
In her own words:
As for my own presentation, the title taken from my novel the 3M “Modern-ism/ity, Militarism, Monotheism”could be catchy enough. However, since Indonesia is leaving behind the militarism era, I would go a  bit further and talk about the “post Order” (both Old and New Order) challenges, and will focus on a set of topics I have been concentrating these last two years, which is another triad called 3R “Rasa, Reason, Religion.”
I heard some reactions from the audience. Especially quite a few from Indonesian offspring are very positive about her quite vague, but free and independent  vision of spirituality. Some Dutch comments consider it rather vague, individual and not realistic in the modern development of Islam, and also Catholicism in Indonesia where the general rules dominate and not so much individual freedom or liberal interpretation is allowed.

Get professional trading signals sent to your mobile phone every day.

Start following our signals right now and make up to 270% daily.