The Rainbow Army of Andrea Hirata

During our trip to Japan I heard for the first time about Andrea Hirata from a Japanese lecturer in Indonesian. He liked the books (a series of four) Laskar Pelangi by Andrea Hirata very much. I borrowed the book from KITLV/Leiden University Library. I had some problems with the Indonesian words: daily talk and this brought me to realise that I lived in Indonesia only until 1988, more than 25 years ago. Much modern slang is not familiar to me. So, I decided to switch to the English translation. This worked very well. I read only the first of the four books.
The novel is about a very small and poor school, set up nearly a century ago by Muhammadiyah people for the poor Malay in Belitung, the island already known  at that time for its government tin mining as it was until recently. Bangka is the island for private enterprise in the field.
The tin mining authority has a prestigious school, there is also a good private Chinese school, but the children of poor people, mostly Malay, some Chinese, are the pupils of the Muhammadiyah school. The school is run by a very young girl/teacher, only 15 years old at the beginning of the six years of the book, together with an older man who become sick and dies in the course of the book. 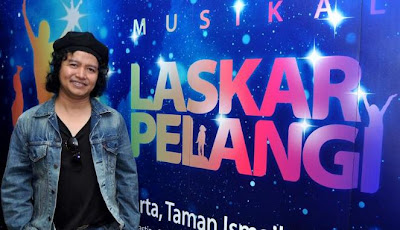 The book is a vivid impression of the world of this school that is not respected by to officials of the Ministry of Education. They want to close the establishment. The building is very poor and it is a problem to have the required minimum of students: 10 for a class, at least for one class. This is a good number and the ten pupils of the class of Ikal (central person of the story who tells from his experiences) are all very different. There is one Chinese boy who also has to learn about Islam and the special character of Muhammadiyah. In the end of the book also a girl from the prestigious school of the Tin Mining Company. One Mahar is very good in music, wins a prize. Ikal falls in love with a Chinese girl, daughter of a shopkeeper, who later moves to Jakarta for her school (and to look after an aunt). Some students are not very intelligent, one is even mentally handicapped. One is brilliant in mathematics: it is a group of different people, but nothing really sensational. The people living on boats, the sawang are described like the Chinese festivals and the coolies and shops of the Chinese. The book sold five million copies since it was published the first time in September 2005.
Although it is about a Muhammadiyah school, there is not much official Islam in the book. The brightest boy is fond of magic, all kind of foretelling and magical power. Nothing exceptional about a love affair between a Malay and a Chinese. Lovely book.
Gepost door Karel Steenbrink op 22:21