SDA or 'Just the Same' or Sama dengan yang diatas?

Minister of Religion Suryadharma Ali must be very distressed these days. His party had no say in the election of candidates for (vice-) presidency, was humiliated, and now its leader has been accused of corruption in the only rich section of the ministry, the organization of the hajj-pilgrimage.
SDA is the abbreviation of this minister, who studied at IAIN Syarif Hidayatullah at the time I was living there with my family as a foreign lecturer. I think that his name now will be known as Sama dengan yang di Atas or 'just the same as the predecessors'. Already in the 1960s a minister of religion was sent to prison for corruption: the first was K.H. Muhammad Wahib Wahab in 1962 (or was it his strong position against Communism?). Second was Said Agil Husein al Munawar (minister 2001-2004) who was involved in setting away money from the hajj business at special bank accounts.
Now we hear that SDA has been called in a case of corruption and had to resign from his position. What a sad photograph in the Jakarta Post! Repentence? 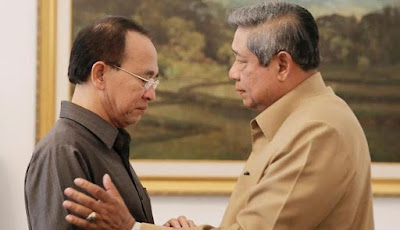