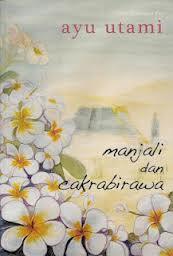 After the two books with stories of a engaged and loving priest Saman and Larung, Ayu Utami wrote Bilangan Fu as a literary pamphlet again Military, Monotheist religion and Modernity. Already in Larung the Javanese traditional religion played an important role. It is glorified in her third novel. The following novel was Manjali dan Cakrabirawa (2010). Marja, 19 years, student design and art in Bandung is more prominent as the key person. She has an official lover, Yuda, 24 years, also a student in Bandung, but more busy with mountain climbing, coaching and in this book he spends most of his time instructing military men in West Java. In the previous book Yuda was close to Judas as a traitor, still close to the true holy man. But here he may be also Yudistira, the gambling oldest of five Pandawa brothers who loses his fortune, the kingdom and even the wife to the five brothers, while Marja Manjali perhaps should not be identified with Mary Magdalene (lover of Jesus?), but with Draupadi, exactly, the wife of the five Pandawa brothers. Besides Yuda there is another young man, who becomes a more Platonic lover to Marja. This is Parang Jati (‘the perfect dagger/direction’), the man with six fingers on each hand and so the man with twelve fingers. The numbers twelve or hu is sometimes prominent in this book like the number fu in the previous one.
Central in the story is the archeological expedition to a Hindu-Javanese shrine on the border of Central and East Java, from the 11th century when there were many more local Javanese elements in the Hindu tradition. A French architect/archaeologist Jacques Cherer (= Jacques Dumarçay?) is quite often present in the book, more or less as an outsider observer and commentator. The ‘old wise man’. The shrine is devoted to Shiwa as Bhairawa, a wild manifestation of this divinity. He is male, macho, violent. There is a 13th century statue from Sumatra in the national Museum of Jakarta. Utami made her own sexually more explicit drawing.
The shrine Calwanarang is from the time of King Airlangga, a pluralist (accepting both Hinduism and several Buddhist sects, 100). In that time there was a couple Bahula (son of the wise man Barada, who kills the witch Calwanarang) and lady Manjali. The shrine tells their story. 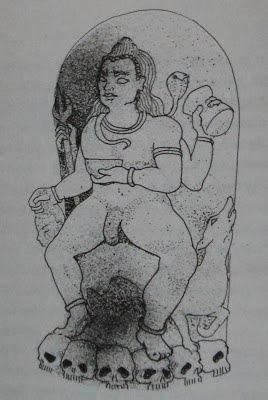 Ayu Utami draws in a less solemn, wilder and more sexual aggressive way her Bhairawa. Below the statue in the National Museum of Jakarta. 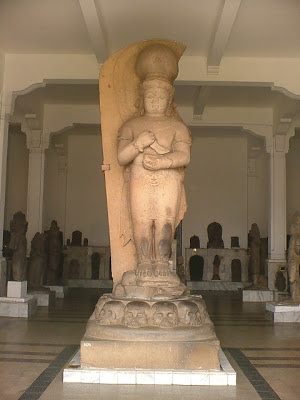 This Cakrabirawa (the modern Javanese version of Bhairawa) is also the name for the special military division that had to protect President Soekarno. Its commander, Lieutenant-Colonel Untung was the central figure in a coup that killed seven major generals, but then was halted by General Soeharto. In the aftermath if this failed coup more than one million people were killed, accused of leftist or Communist sympathies and the PKI or Communist party was banned while the country was ruled for more than 30 years by a harsh military regime.
While working at the excavations of the shrine, Marja meets a lady who lives secretly in the forest, more or less like a hermit. She was married to a soldier who was a member of the Cakrabirawa brigade, was arrested and killed after the failed coup of 30 September 1965 (G30S). The lady, Murni (= Pure), was pregnant when her husband was arrested. She was also arrested and her child, a boy, was taken away from her. Marja for some time thinks that she is not a common human, but some kind of spirit, perhaps related to the witch Banaspati who is fond of menstruation blood. In reality, she has her period at this moment and some people accuse her that she is impure. Later she realizes that the Gerwani or Communist Women’s Organization was accused of drinking the blood of the generals they had killed at G30S. But Murni proves to be a true human being. 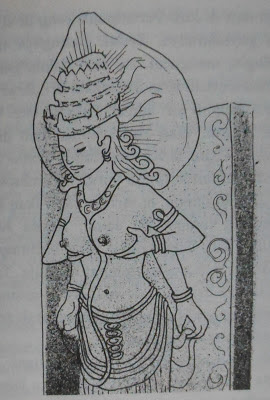 Durga as Banaspati as drawn by Ayu Utami on p. 177, here representing the spouse of the wild Bhairawa, but also spouse of Bahula. Manjali and even resembling Sinta.

While the excavations go on, Yuda is giving climbing lessons to soldiers in West Java. He wants to hide this fact for Parang Jati who hates the army and violence. One of his most industrious students of some Musa who invites him to join to a brothel in the evening. Yuda does not have sex with one of the ladies, but gives as an excuse that he is a traditional Javanese who in now in a 70 days period of fasting to gain power. He will lose this power when he has a sexual ejaculation. This episode (59-64) is a description of the hypocrisy of the soldiers and their brutal use of their power (also when Musa joins Yuda in a tour to his teachers at the university in order to obtain a postponement for his examinations). Musa is fond of all kind of magic and wants to find the powerful Cakrabirawa mantra and therefore comes to the place of the archaeological search.
Parang Jati and archaeologist Jacques decide that they will hand over the valuable finds of the excavations to a government official of the archaeological service. This is not successful because the official is attacked by Musa who steals the valuable golden remains. But in an attempt to find more, Musa falls in a very deep old pit and only through the climbing skill of Yuda he can be rescued, although he is initially still in coma. It turns out, that the pit near the shrine was dug for the burial of the husband of Murni. Musa has a special kind of snake around his neck and so is recognised by Murni as her son who was taken away from her some 30 years ago. This episode seems to be rather accidental and not really easy to believe. It reminded me of some episodes in the novels of Murakami who also has many mysterious powers steering human destiny.
Musa is recognised because he has a symbol of snake around his neck, with some other symbols. These are also drawn by Ayuu Utami. 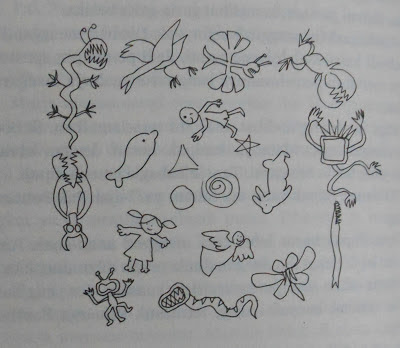 The novel is announced as a roman misteri dan roman spiritualisme kritis.
It is clear from the quite fragmentary description above that much Javanese spirituality has been put in this nice book. Page 181 has even a deep sentiment about the wonderful atmosphere of peace and spirituality in the period of Airlangga (Betapa damai dan spiritual masa Airlangga). Sex and spirituality are here in many pages, sometimes in contrast like the hypocrisy of Musa the soldier, but often also reinforcing, when control of sex gives spiritual strength. There is a political position against the Soeharto government and its crude suppression of Communism.
Marja, Yuda and Parang Jati are not particular religious. About the latter it is even explicitly said that he has respect for religious rituals but does not practice them himself. He calls himself a critical spiritualist, whatever it may mean. He does not pray, not the Muslim salat, Bali-Hindunese praisa, food offerings, meditation of some kind of yoga, or whatever ritual there is. (209: Ia menyebut dirinya seorang spiritualis kritis. Marja talk pernah melihat Parang Jati melakukan ritual. Apa pun yang bisa dianggap Marja sebagai ritual: berdoa, sembahyang, sholat, memuja, mempersembahkan sesajen, bermeditasi, sejenis yoga, atau apa saja. Yuda juga tidak. Tapi, berbeda dari Yuda, Parang jati tidak pernah mencemooh hal-hal yang tidak dia lakukan itu.)
The only outspoken Catholic in this book is the French archaeologist, Jacques. He confesses that he believes in reincarnation, notwithstanding his Catholic faith. Marja says that reincarnation is a Hindu and Buddhist belief, not a Catholic one. ‘Indeed. No. But Catholics know a concept of “cleansing fire”. That is called the Purgatory. The souls of the deceased that are not yet holy must cross a  cleansing fire” before they can enter heaven. The length and intensity depends upon our sins. Well, now it is our duty to define further the character of this “cleansing fire”. Theologians and artists or earlier periods in the European Church have described it as some mild kind of hell that is not so brute. There is fire, and devils, but also angels who are waiting to carry our souls when the sins are already roasted away.’ Jacques laughs in a modest way. ‘But nowadays I like to think about it as some kind of reincarnation. We are born again, in a long series until our soul has been purified and we may attain heaven, that is nirwana like in the Eastern religions. The “cleansing fire” does not work in a realm of souls, but also in this world.’ (41). Marja is happy with this explanation and asks why the Church does not teach it this way. Jacques suggests that that more painful description is more effective to push morality harder. Le mystère.
Another theological talk is between Jacques and Parang Jati who suggests that we all commit sins but also perform good acts. ‘Sin can be something that we commit. But it may also be something that gives birth to us, creates out weakness. Something at the origin. But human beings are able to choose. Man has a free will, after the original sin.’ ‘Oh, la la, that sounds as if we here Saint Augustin talking.’ (239)  These Catholic theological fragments are just short interludes among many other themes in this book. Some people complain about the complex structure of her books, the many themes that are only touched upon and not elaborated in full length. Other readers estimate that this is the strength and the richness of her work. It is never boring, always full of surprise, asks for an attentive and understanding reader. It always combined daily life in many aspects with spirituality, mysticism, some sense of the mysterious, often in a very unexpected and critical way. Truly roman misteri dan roman spiritualisme kritis as it is announced on the cover text.
Gepost door Karel Steenbrink op 14:24

BlueHost is definitely one of the best hosting provider for any hosting services you might need.