Recently I received three publications in French on Christians in Indonesia.
The first is the special issue by the journal Histoire et Missions Chrétiennes (no 19, September 2011). It is an issue with 164 pages, edited by Marc Spindler and Karel Steenbrink (my name has been added, but most of the work was done by Marc Spindler and Paul Coulon).
The issue has the French translation of my speech in Paris, in 2008 at the invitation of Remy Madinier. Theme and title was: The Indonesian Exception. Why and how can we explain that several millions of converts from Islam came to Christianity in the island of Java between 1820-1980? It can be explained by the special character of tradional abangan Islam in Indonesia. There is an overview by Marc Spindler about the writing process of the book A History of Christianity in Indonesia. Spindler has also a quite theoretical study about the working area of church history and missionary history. Budi Subanar presents the challenges of modern Catholicism in Java.
The most interesting contribution, as to me, was by Jan Aritonang who asked himself how far the Indonesian protestant churches already have reached independence: in the field of finances (no!!), personnel (yes, but..) and theology (no!!). 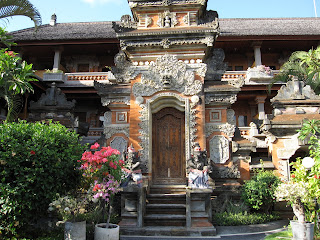 (Pictures are here chosen from our last trip to Indonesia, September-October 2009. Above our hotel in Bali).

A second publication is by Remy Madinier in the journal Archipel on the history of  the Ursulin Sisters in Indonesia, 1856-1956. Much of this contribution is based on research in the Roman Archives. The Ursulin sisters were very international but for a long time French was their major language. This is about a period that I also discussed in the first two volumes of Catholics in Indonesia. Madinier could add many interesting details, that are quite easy to understand if one knows the greater story. He stops at the end of a period: the Ursulin sisters focused on Europeans and they had to move to Chinese and Indonesians in the early 1950s. They did so, although some older sisters were not able to switch to Indonesian. (I can not find the text at this moment and hope to discuss this nice article later in some more detail). 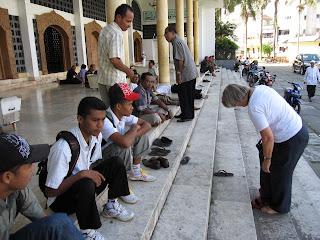 (Above a picture of the central mosque of Ambon and Mrs. Paule Steenbrink-Maas, taking off her shoes).

The most interesting contribution is clearly the chapter written by Remy Madinier in a book on the missionary endeavours in the borders of the Muslim World.
Bernard Heyberger & Remy Madinier (eds), L'Islam des marges. Mission chrétienne et espaces périphériques du monde musulman, xvi-xxe siècles, Paris: IISMM/Karthala, 2011, 288pp.
The book has ninen major contributions: on the missionary efforst in India at the time of Akbar (ca 1550), on Syrian Druzes and Nusayris; Alevi, Kurds; the Berbers of Morocco; on Cameroun.
For me the most interesting is the contribution (231-265) by Remy Madinier on Java, 1800-1940. He starts with the difference among Protestant professional and free missionaries between strict orthodox, Dutch style Christianity (kristen londo) that asked converts to live in a European style, against Kristen Java who were allowed to continue a Javanese style of living, like circumcision, community meals or slametan, to enjoy wayang performances and many other local practices. Madinier compares the division among Muslims in a santri  and a abangan variety with this division and concludes that there are many similarities in the way of believing of the Kristen Java with the abangan. Madinier gives ample attention to Eurasian women here, like Mrs Le Jolle and Philipps (with conclusions similar to those of Th. Sumartana, without mentioning his (Mission at the Crossroads).
As to Catholic mission, Madinier gives some new material from Roman Jesuit archives: he starts with the very negative judgments by early and mid-19th century leaders like Apostolic Vicar Vrancken defines all native Javanese as Muslims and who excludes the possibility of the conversion of these persons to Catholicism. Then he turns to a quite peculiar figure, the Jesuit priest Jan Palinckx who served about 30 years as the parish priest of Yogyakarta, but worked only among Europeans and Eurasians. Palinckx attacked to thesis about a solid and monolythic Muslim confession in Java and sees more variations. This looks like an important source, also seen the thesis by Merle Ricklefs about the rise of abangan Islam in the seconds half of the 19th century.
The conflict between Hoevenaars and Van Lith (that I did not really emphasize or even elaborate in my discussion in the two volumes of Catholics in Indonesia) is for Madinier the difference between a Dutch style Catholicism (Hoevenaars) and abangan/Kristen Java or Jowo (Van Lith). This is an interesting thesis, especially when concentrating on the considerable flock of ex-Sadrach Christians who addressed Van Lith and became his first major group of baptized.
Madinier has some problems in describing the majority of converts who came through the schools, after 1904. He calls the rightly priyayi but this priyayi versus abangan idea is not so deeply elaborated. Catholicism (like Protestantism) received a modern character against Islam as old-fashioned and traditional in the first decades of the 20th century. 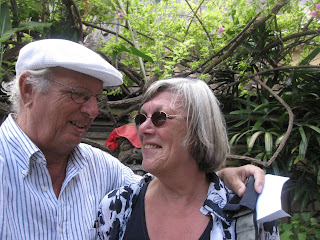 Madinier has nice descriptions of what he calls les acrobaties théologiques of Van Lith: even a defence of a priest who could act as a civil service official and cooperate in a divorce, in order to minimize the religious meaning of the work of the kaum or penghulu, the civil servant who officiates in the public administration rather than in religion. This is a nice piece of work! Thank you, Remy for sending me this!