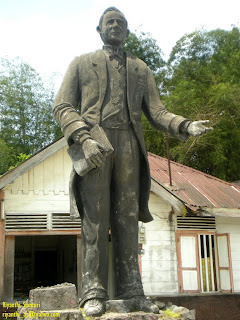 The conference in The Hague resulted in many comparison, between Indonesia and the Carribean colonies of Holland, foreigners like army, police and missionaries. A quite interesting presentation was given by Deasy Simandjuntak, Ph.D. student in political science at UVA, University of Amsterdam. She brought pictures and a nice story about the bupati election campaigns of 2005. The bupati or district head was for the first time elected through direct campaigns (no longer nominated by the central mgovernment in Jakarta). in Toba area it was mostly a campaign of families, invoking the grand old man of the Batak church (see statue above), but also the tombs of the ancestors. In Karo areas it was more a revival festival with religious and traditional songs, many young people debating, directly in contact with the audience. Simandjuntak (herself from the Toba region) made a relation with the top-down rather elitist Lutheran mission in the Toba region where a very dominating figure was the great inspirator for the turn towards Christianity. In the Toba region it was the Minahasa teachers rather than the not so successful Dutch missionaries who brought Christianity and it took also much longer before people really embraced Reformed/Calivinist Christianity where the minister are chosen by the congregation. Feudal Luther against the democratic Calvinist style. 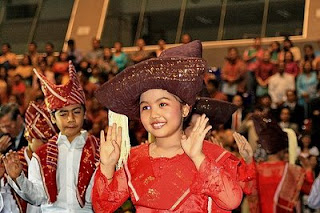