Inflated and dangerous accusations of blasphemy

Blasphemy is a hot issue in Pakistan, where all kind of Christians and other people easily can be condemned in court cases for anything that does not honour the Prophet Muhammad or other aspects of Islam. Last week this has hit the well-known Dutch critic of Islam, politician and member of parliament Geert Wilders. He had announced a contest of making cartoons about the Prophet Muhammad, to be shown in November 2018 in the building of parliament. Although he was only allowed to show these in the private rooms of his own party in that public building, the idea has caused such vehement protests in Pakistan (with thread to stop all trade with the Netherklands, send the ambassador home), that Wilders last week has withdrawn his proposal.

In Indonesia the best known case are the demonstrations aganst Jakarta governor Ahok in December 2016, which have caused that he is still in prison now (until early 2019), just for giving his personal opinion about the interpretation of a verse of the Qur'an. 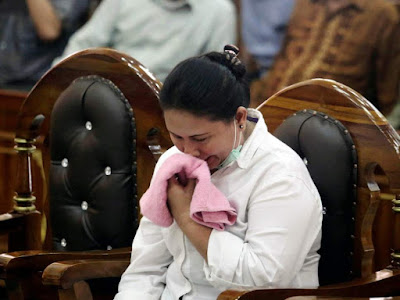 On 22 July this year a Chinese lady in the town of Tanjung Balei complained to neighbours about the loudspeakers of the mosque just next to her house. She had the impression that it was much louder than before and said that it even was painful in her ears. This is a complaint that I also heard from Muslim colleagues in Yogyakarta: they come late to the Friday prayers, because the sound of the loudspeakers is so painful that they do not like to sit there for ten-twenty minutes, before the Friday prayers start.
Meiliana could not guess that this remark would evoke a chain of protests from the side of Muslims of her town. How just this simple remark could lead to a chain of violence is not clear. On 29 July the DKM, Dewan Kemakmuran Masjid, the Governing Body of the Mosque Al Maksum, came to her house with questions like: 'Do you want us to stop at all with the call to prayer?' There were also general negative remarks about Chinese and Muslims:
"One Ustaz complained that Chinese are arrogant, that close to temples many prostitutes are found, Muslim girls who are sold to Chinese." This 'iterrogation' ended after the last prayers that day in a demonstration.
The result was that during the demonstration, the house of Meilana was set to fire. But it was soon exstinguished because her neighbour was selling gas in bottles. Thereupon a large number of demonstrators went to several Chinese temples and not less than 14 Chinese temples were ransacked in a violent atmosphere that began about 21:00 and lasted until shortly after midnight, when riot police came in a calmed down the region.
The result was that some of the leaders of the riots were setneced to three months of prison, but the 44 year old Chinese lady Meilana was sentenced to 1 1/2 year prison beaucse of penodaan agama, defamation of religion. A sad end to a development that apparently could not be stopped (or was rather abused by politicians who take profit from these developments in order to increase their popularity). An observer called this 'hate spin', the profit generated by hate.

You should see how my associate Wesley Virgin's tale launches in this SHOCKING and controversial video.

You see, Wesley was in the army-and shortly after leaving-he revealed hidden, "mind control" tactics that the government and others used to obtain anything they want.

These are the EXACT same tactics tons of famous people (notably those who "come out of nowhere") and top business people used to become wealthy and successful.

You've heard that you only use 10% of your brain.

Really, that's because most of your BRAINPOWER is UNCONSCIOUS.

Maybe that conversation has even taken place INSIDE OF YOUR very own head... as it did in my good friend Wesley Virgin's head around seven years back, while driving an unlicensed, beat-up bucket of a car without a driver's license and $3 in his bank account.

"I'm very fed up with going through life check to check! When will I become successful?"

You took part in those conversations, am I right?

Your success story is waiting to start. You just have to take a leap of faith in YOURSELF.