Aa Gym between Psychology and Shari'ah

Last week James Bourk Hoesterey was in Leiden to talk about methodology of social science and the humanities. He criticized the emphasis on libraries, books and archives, manuscript collections. Edited short movies should be seen as the new source for finding facts and theories.
Not everybody was charmed.
J. Hoesterey did not talk much about his Ph.D Thesis on Aa Gym, the reason why I went to Leiden to attend his talk. But I could borrow the book and read it. 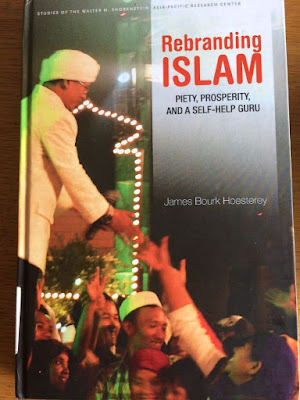 Aa Gym (born 1962) was the son of a sports trainer in a school in Bandung and therefore the strange Arab-Indonesian name of Abdullah Gymnastiar. After general education and some years in a technical university, some study of accountancy, Aa (older brother, in Sundanese, apparently the same as kakak in Indonesian), earning money with making movies of celebrations like graduation. There was a marriage with a pious wife in 1987. Aa began a business as a preacher in Bandung in 1990. His formal knowledge of Islam and Arabic is poor, but he has a good sense of homour and practical insight in human problems. Already in 1992 Times magazine labelled him as 'Indonesia's Holy Man'. In 2000 he held his first sermon at SCTV, in 2001 his first great talk in the national mosque of Indonesia, Istiqlal in Jakarta.
Hoesterey has a chapter 2 with the title: Popular Psychology and Religious Wisdom. He also compares Aa Gym with televangelists and with other self-help gurus. There is some and even now and then a strong Muslim flavour in his teaching. Frequent Qur'anic quotes are in Arabic, but there is no talk about application of shari'ah. After the terrorist attacks in Poso he once preached in a Christian church and his concern for harmony and unity in Indonesia is sincere.
Hoesterey acknowledges that Islam in Indonesia is part of a global religion with the Arab countries as the centre. But newer developments should not always be explained by this Arab background. Like ESQ Training (Emotional Spiritual Quotient) of Ary Ginanjar has more affinity  to 'the American pop psychology of Daniel Coleman, also much content of Aa Gym is taken from self-help programmes in the international psycho-market.
Hoesterey started research in 2006 and after about one year it became known that Aa Gym had taken a second wife and his imperium of some 700 employees collapsed within a few weeks. The researcher was present and gives a fascinating story of the scandal. Aa Gym recovered slowly but never became as famous as before. What a case for a researcher, to be so close to so dramatic changes in the subject of the research!
The first chapter of the book looks like a hasty collection of all kind of broader theories. That is necessary, apparently. I liked mostly the balanced narrative of this surprising development of a major personality in modern Indonesian Islam.
Gepost door Karel Steenbrink op 06:22