The Garuda, the mount of Lord Vishnu, is part of the image representing the Republic of Indonesia and its iedology of Pancasila. It has already often been stated that it is not really an Indonesian or  Indian magical bird, but rather a European eagly in the way it is represented in the Russian and German nationalist symbolism.
Last I visited the central region of Spain. Most impressing was the visit to the Valle de los caidos, the valley of those 40,000 who died in the civil war between 1936-1939. In a high uninhabited valley, with much forest, the General Fancisco Franco ordered to build a military looking square and the entrance to a 250m long basilica in the mountain itself. No natural light, ony dark granite stone and the usual furniture of a church: images, great carpets hanging on the wall, representing the biblical book of Apocalyps, the war against the army of the Anti-Christ, Dajjal in the Muslim terminology, the devilish enemy of God, fighting against angels.
The entrance the entrance is dominated by Mary sitting as pietà, the mother mourning over her dead son Jesus. The whole atmosphere here is super-Catholic (including a large monastery with a good group of monks who daily pray for the souls of the dead), although the civil war was between Nationalist Catholics and Leftist, Communist-dominated Republicans. Left of the entrance a symbol of the Spanish nation (or the house of the king?) is represented by the shield, protected or even defended by the mighty aegle. 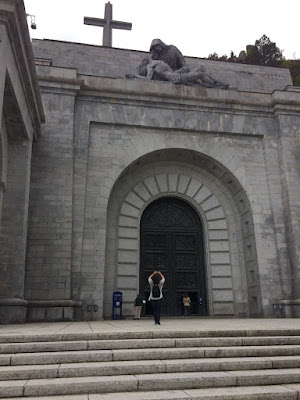 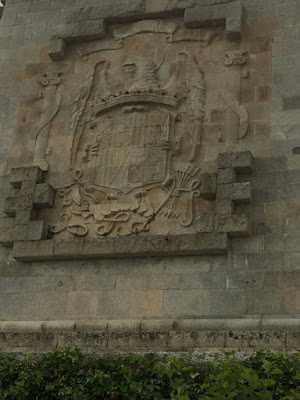 The cross (only partly visible above) is 150m high. The mourning lady Mary, motyher of Jesus represents also a Christian symbol for mourning the dead.
This imaginery is very strongly connected to Chriistian symbolism only. It reminded me of the lack of awareness of the 'leftist' victims of the political struggle in Indonesia: the six generals have received names of streets, monuments and movies, while so many people connected with the 'losers', the Communist Party, sympathizers,  people active in trade unions and women's organizations cannot be mentioned and their stories are often still neglected. Also in modern Spain it is still quite sensitive to start the debate about this one-sided image of the past.
Gepost door Karel Steenbrink op 01:05