Only now I have read a first novel by Eka Kurniawan. It was hit first Cantik itu luka, from 2002, and I used the Dutch translation by Maya Liem, published in 2016.
The book is written in de magic-realistic style, which we also know from Ayu Utami's Bilangan Fu and where the Japanese author Murakami is a well-known representant.
It is realistic: the main figure is a pretty Eurasian lady Dewi Ayu, born about 1925, who was forced to become a prostitute in the Japanese administration. She has four daughters: no 1 marries a Javanese soldier who already was fighting the Japanese in 1943-5, then as a guerilla warrior aginst the Dutch, but later he became a corrupt military officer of the Indonesian army. No 2 marries a  handsome and intelligent man who becomes a Communist, leads the poor fisherman aginst the military who receive money from the fleet of big ships fishing illegally. No 3 marries a thug who become a great criminal in a harbour place in Southern Java (Parangtritis? Cilacap? Pengandaran? Pelabuhan Ratu?) No 4 is the mythical one, very ugly and gifted with magical elements. She plays a minor role.
Many historical details are used here, not in the heroic style of the Suharto period but in the critical, even somewhat cynical style of the Reformation Period, after 1998. So, there is much emphasis on the conflict among the Indonesians in the period 1945-1949, Communists against Nationalists, people who sought a military career against  those who did not like fighting. The prisoners in Buru in the 1970s, the oppression of nationalism in East Timor by the army.
It is a cruel book full with drama, killings, forced sex: it is not a romantic and soft book.
Especially the ghosts of the 'Communists' are described as frightening and dominating the lives of many people. They are afraid that the ghosts will take revenge for the cruel killings. They are anxious that curses will effect their life.
There are several religious elements in the book, besides the myths and magical effects of the ghosts: official Islam only enters in two ways: the penghulu is necessary for an orderly bureaucracy of marriage and the imam takes care for prayers at burials. That is all for Islam: only these two rituals.
There are some references to Mary, mother of Jesus. First on page 15-6 where she is seen as a resting place for the divine son, compared with the two wives of Pandu andf their sons. Dewi Ayu is (p. 144) seen as born in a Catholic family and she joins the teacher training at the Franciscan Sisters (of Mendut?) Page 338: No woman can be pregnant without sexual intercourse, unless you believe that Mary gave birth to Jesus without a relation with a man! 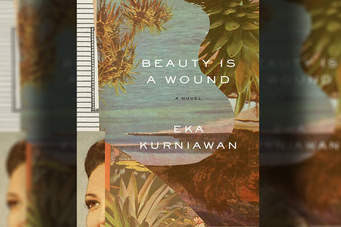 On the whole, however, the description of religious ideas and practices is only in passing, without depth and often negative: not a positive value but only something to become afraid, especially the ghosts of killed Communists.
How different from Ayu Utami who in Bilangan Fu 2008) gives much attention to the ecological spirituality of Suhubudi and his padepokan, some kind of Neo-Javanism, where religious traditions of Java are open also for modern thinking and the global traditions of Islam and Christianity. The same can be found in her Saman and Larung (resp. of 1998 and 2001).
But on the whole the story of Cantik itu luka is fascinating reading agianst the background of modern Indonesia.
Gepost door Karel Steenbrink op 06:54