The highest award given to Franz Magnis Suseno was the Bintang Mahaputra Utama (Award for being an Excellent Son) by President Joko Widodo, 13 August 2015.
UCAN had on 24-10 a report  of the first award for 'outstanding philosopher' or Filsuf terkemuka, given by the faculty of philoophy of the Gadjah Mada University of Yogyakarta and it was given to Magnis Suseno for his 'intellectual support for social struggle'. 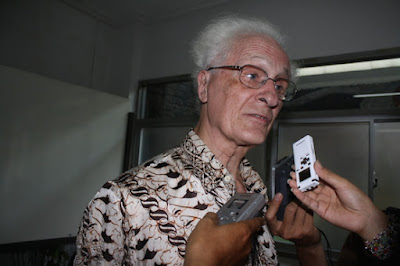 Born in May 1936 in Silesia (then East Germany, now in Poland), he has been in Indonesia since 1961 in Indonesia. Founder opf the Driyarkara School of Philosophy in Jakarta he has given comments on many social issues in Indonesia as a specialist in social ethics, taking Javanese culture and even mysticism as his intellectual partner. In my book on Dutch Colonialism and Indonesian Islami (first edition p. 147) I wrote 'Again and again Javanism is cited as the partner in dialogue, while Islam is not considered to be a proper or even possible candidate'.  In the second edition (2006) of this book the last chapter has been thoroughly re-written and this remark has been deleted.
Even liberal Indonesian Muslims now want to see Islam Nusantara as a strong concept: local formulations of Islamic wisdom rather than repeating an ethic based on shari'a rules and formulations. This has also been the strategy of Driyarkara himself who wanted to take Pancasila as the basis for social ethics. In the same line Magnis Suseno has formulated social strategies using not one particular religious tradition (also not his own Catholic doctrines), but more universal and some local and cultural background.
Gepost door Karel Steenbrink op 21:56