Bishop of Ruteng, Hubert Leteng known as anti-mining (of manganese) but also accused of fraud and womanizing

Hubertus Lenteng, born in 1959, has made a good career in the Catholic Church of Flores. He studied at a university in Rome, where he received a Ph.D. Then he was  nominated rector of the diocesan students in Ritapiret, near Maumere, united with the SVD seminary of Ledalero. In 2009 he became bishop of Ruteng in Manggarai. At the age of 58 something of the end of an ecclesiastical career, but also the challenge of a public position.
In 2014 Leteng became known as the bishop who protested against the mining of manganese (Mn), important for the batteries in our headphones. The mining procedures cause much pollution in the environment and many people who lived near the mining area in Rutang became sick. In October Bishop Lenteng joined the protesters against the mine as it was at the time. He even said mass close to the mining area as a kind of civil protest against the easy procedures to delve the mineral. 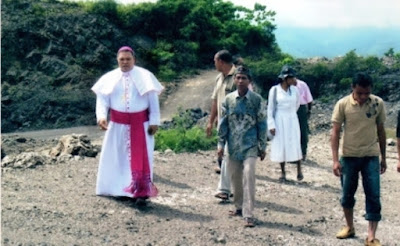 Here we see bishop Hubertus Leteng walking ceremoniously in full dress as a bishop in the mining area close to Ruteng, probably one of the highest capitals of a district in Indonesia.
However, not all believers, including quite a few clergy, agree with their bishop. In 2014 an unnamed priest who sought dispensation from the celibacy and wanted to leave the priesthood, issued an accusation against his bishop (who anyway cooperated in his file for dispensation, to be granted by the Vatican). This (ex-) priest stated that the bishop had a love affair with a lady who is not further mentioned.
In June this year there was a continuation of this affair: not less then 70 priests protested against their bishop who according to them had taken some US$ 130.000 from the financial office of the diocese as well as a loan from the national Catholic office in Jakarta. They state that this was to finance his love affair. The bishop did not deny the loans, but declared that he had taken the money to provide a fellowship for a poor student from Manggarai who wanted to continue his training to become a pilote in the United States. Quite astonishing: the 70 priests have for this period suspended their priestly functions, until the bishop will resign from his office.
The apostolic nuncio in Jakarta, Antonio Guide Filipazzi, as well as the ambassador of Indonesia to the Vatican is involved in this affair. It is sometimes difficult to believe in the One, Pure (sanctam) and universal Church! 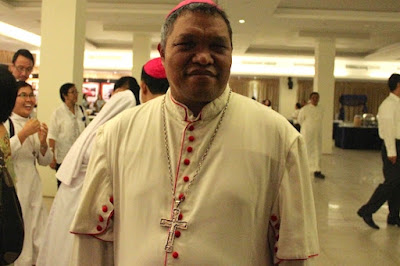 Later reports (some information added on 14LOctober 2017): the rumours about affair of the lady were spread already several years ago, but now the financial issue came also part of the debate about the bishop.  Now the Vatican started action and in early October there was a report that the bishop 'esigned and the Vatican has accepted his resignation.' This is not the final information about this affair. Three predecessors of bishop Leteng also experienced many problems in their diocese, where the Catholic church experiences influence from clans and political pressure groups. The last Dutch bishop of the diocese (Willem van Bekkum) resigned in 1972: people complained that he loved to give talks and speeches worldwide and to stay outside of his diocese, preaching inculturation and adjustmant to local conditions.
Gepost door Karel Steenbrink op 10:53