Three mediators for a modern and moderate Indonesian Islam in Leiden

Three prominent Indonesians, Alwi Syihab, Azyumardi Azra and Amin Abdullah are making a 6 week trip to Europe and America. They want to promote the position of Islam in the Muslim world as  a place of reason and safety. Although they also experience some problems in their own homeland, they want discuss further steps in favour of religious harmony, adjustment to the modern world.
They made their first visits to Berlin and London and arrived on Amsterdam airport in the early morning of Friday 7 April 2017. They went immediately to the meeting in the former observatory for atsronomy of Leiden university. Still quite tired! 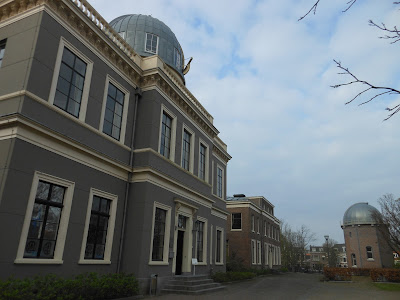 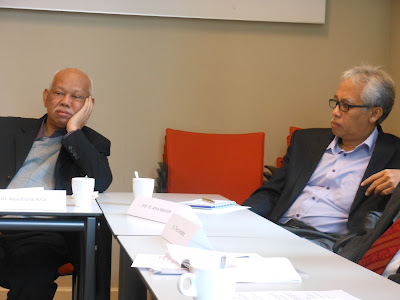 Left is here Azyumardi Azra from Jakarta, right Amin Abdullah from Yogyakarta. Listening. Apparently it is not all exciting during such a long trip. Only looking more lively when speeking.
The whole mission was initiated by Jakob Tobing and Matius Ho of the Leimena Foundation after the Protestant Vice-Prime Minister of Indonesia in the first decade of the independent republic. Financiel and moral support comes from an American conservative Christian organization, Fieldstead and Company, here represented by Steven Ferguson. There was one intriguing question: Why are the radical Muslims so attractive for youngsters?  One answer was: because they have much money (from the Gulf States and Saudi supporters). But the opposite answer was here present as well: a war or at least a competition to find supporters between radical and moderate Muslims is als the one between Arabian and Western supporters and funders!
There are in Indonesia thousands pesantren  or Islamic boardings schools (a number of 30,000 was given) against only some 30 truly salafi pesantren. There are some 4,000 Indonesian students in al-Azhar, Cairo, an institution where besides some Wahhabi, also quite many liberal Muslims are teaching. In Arabia less than 1000 Indonesian follow academic education. An not all of them turned into Wahhabi activists!
Attractive for Salafi Muslims is the description of the problems. Alwi Syihab formulated it as: 'You Muslims, you are not master of your own country! Islamic values are not guaranteed here!' But Azyumardi Azra reacted: 'Among Salafi Muslims there is also a battle about the definition of what is true Islam.' 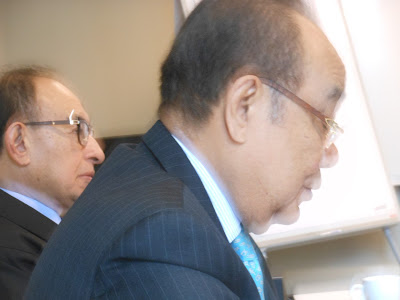 It  was quite curious that Jakob Tobing, a Christian politician, was the initator here (above right). Above, left, we see the senior politician and  a prominent member of the Nahdlatul Ulama Islamic organization. Alwi has a strong talk about the past of Islam in Indonesia. It was introduced since the 1`2th century without any violence. This was done by Sufi traders with soft persuasion. They made the Hindus to believing Muslims. This is so different from what is happening today when angry Arab teachers turn the believers into unbelievers. This is a quite complex statement: Indonesian Muslim are labelled as unbelievers by a movement called takfir: people who label all who do not accept Islam as they do it themselves, should be called unbelievers. In this way from a majority Muslim country a battlefield for true Islam has been created! Henk Schulte Nordholt wisely concluded that here in Leiden we were 'among the believers!'  I quoted (again) the remark of Mangunwijaya that 'Indonesia has too much religion'.  Too many people claim that religion is so important and that everything, all problems, must be solved by more religion. So many countries with low participation in the great religions have a good welfare system for the poor, the old and the sick.
Azyumardi blamed corruption as one of the causes: Indonesian economy is stagnant and there is lack of credibility in politicians. Salafi preachers claim that religion will be the solution, but they can never give real evidence for this.
The only woman in the group here was Naima Ajouaau of Not my Religion!, a group and a website against radical Islam in the Netherlands. But she had to give in that her group of activists wanted to give secular education and teaching of the Dutch language to migrant women who in fact wanted knowledge of Arabic and Qur'an reading as well as cheap (salafi) books rather than secular knowledge and liberal Islam.
A new term was launched (at least new for me): Wasatia Islam means Islam of the middle of the road, after the verse of sura 2:143 that the Muslim community should be a group of the middle. It is in the section of the change of Qiblat from Jerusalem to Mecca where Madina is the middle. But it is now also used between secular society and full shari'a state, in fact the Pancasila State.
I repeated the suggestion that moderate Islam has a connotation of tame, not really convinced and enthusiast system of belief. Islam Nusantara may add some nationalist fervor to the Indonesian Muslims. Anyway they do often not really like the Arabs! 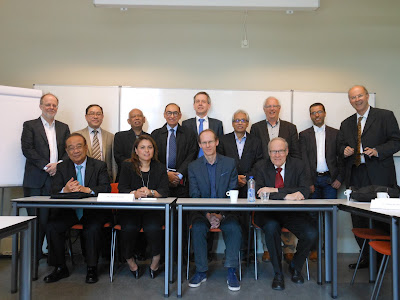 A photo was made at a moment when quite a few had already take leave and a select group was preparing for the nice lunch we had and where talks were continued in an informal way. Perhaps some secuilar opponents of Islam should have been invited as well as radical Muslims: it is one step again in the quest for a modern and adjusted Islam for the whole world!
Gepost door Karel Steenbrink op 10:40