While working on the history of Muslim-Christian Relations, two western scholars were pioneers before the great project of David Thomas began. Jean-Marie Gaudeul published in 1984 two very rich volumes. But the first to write a comprehensive book was Norman Daniel, Islam and the West. The Making of an Image (1960). Norman Daniel was not someone in an academic position: he was for a long period, (since 1947) involved in the management of the British Council, basically a fine library and institute for cultural exchange (exhibitions, lectures for well-educated people) in various places in the Middle East: beginning in basra, Baghdad, Beirut, Khartoum and finally in Cairo where was was also Cultural Attaché, part of the British Embassy. He died in 1992 and George Anawati,m Dominican priest and scholar wrote an In memoriam for him in MIDEO (1993), where he 'forgot' or anyway did not include his year of birth.
Kristin Skottki did some work on him for her 2011 dissertation on the first crusade and praised him for his great knowledge of sources and his restrained criticism of mediaeval theologians who often knew  enough about Islam ('well-informed') but nevertheless fabricated theological condemnations because they thought they had to do so ('willingly distorted it'). 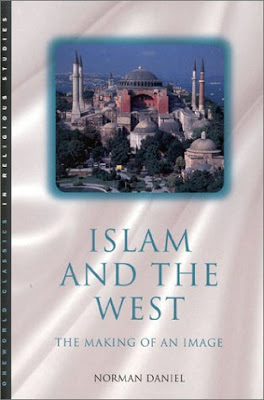 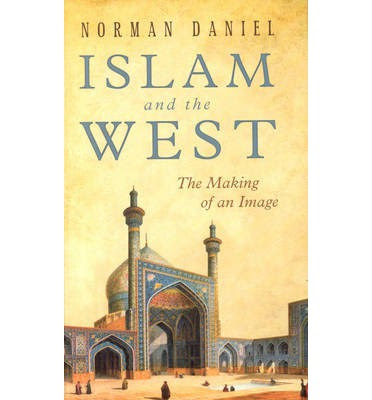 Daniel wrote in the opening lines of the Foreword for the 1960 edition of his great book (a best-sellers. I found even more different editions and covers for this book): 'I hope that Muslim readers will not be scandalised by some of the things in this book'.
That was the same feeling I had when I read the Indonesian translation of my Kawan dalam pertikaian: Kaum Kolonial Belanda dan Islam di Indonesia!
Daniel wrote lengthy books with many footnotes. After this first book, he published in 1966 a book Islam, Europe and Empire mostly on 19th century colonialism which was much more cultural (superiority) than theological, related to the Western domination of the period. In 1975 appeared Heroes and Saracens about the chanson de Roland, as well as The Arab impact on Sicily and Southern Italy in the Middle Ages.
In 1979 Edward Said  published his book Orientalism, followed in 1981 by Covering Islam. Said praises Norman Daniel for his subtitle: 'the making of an image' which is 'a phantasy, a phantom' not reality. In 1985 I was in Yogyakarta where Covering Islam was presented in the Indonesian translation. Amien Rais was there too and saw all Western Orientalism as an attack on Islam. Mukti Ali at the time pleaded for Occidentalism: easterners should study the West in a modern open way. I pleaded for an open attitude as well: many Muslims also have used the books by Said and Norman Daniel only to play the victim. That is an unproductive reading of excellent texts.