Hardliners versus soft voices: LGBT in Jakarta and Kotagede

The Universitas Indonesia in Jakarta-Depok is planning-developing a Resource Center for Sexuality Studies, with a Support Group. This initiative was denounced by Muhammad Nasir, minister of Research and Higher Education in the Jokowi Cabinet. He also added that he considered the initiative as a support for homosexuals and ´violators of the moral values of Indonesia´.
His call was followed by a rare common declaration of the major religions of Indonesia: Majelis Ulama Indonesia, MUI, the Conference of Catholic Bshops, KWI, the Buddhsts of Walubi and the High Council of Confucians in Indonesia. Majelis Tinggi Agama Khonghucu Indonesia or MATAKIN. No reason was given why the Protestants and Hindus were not part of this declaration (UCAN, 10-02-2016).
A critical voice in this debate was of Franz Magnis Suseno (UCAN, 18 February 2016). He stated that sexual orientation is something discovered by an individual person on the way to adulthood. This must be accepted and not discriminated because people are born in natural diversity. Most of them are attracted to the other sex, but if this is not the case, people should not be discriminated. Magnis Suseno rejects the idea of a blessing or legal possibility for a homosexual marriage. 'And it is not necessary because these couples will have no children. And marriage is for the legalisation of children. But how these homosexual couples act according to their own will and in private live, is not a matter for the state and other people.´ 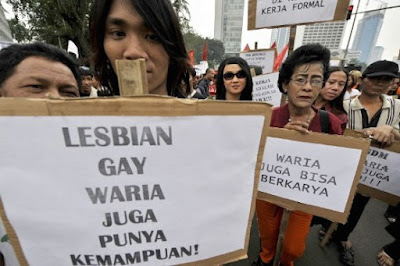 In Islamic Law there is a third category besides man and woman: the hermaphrodyte. In fiqh books they are mentioned as a status between man and woman. For Indonesia the word is waria, (a word combining wanita-pria). In the debate this concept is not mentioned until now.
A small house, called pondok-pesantren Al Fatah was opened in 2012 in Kotagede, Sayangan, under supervision/connectin to Nahdlatul Ulama, especially for transgenders. It became the focus for protests by FPI, Front Pembela Islam, but also for supporters of this initiative. Initially the local police defended the place, a private house on Joglo style, built in the 1800s for a family and donated for this purposem by the family of its director, Shints Ratri. The best known transgender is Maryani, who  failed to make the hajj-pilgrimage in 2013. The following year she was successful to do it. She died in 2014. Notwithstanding the support of NU leaders, the police later withdraw the protection and closed the religious school on 25 February 2016 to defend 'public order' (it is located in a narrow street; at events many youngsters come and bloc the road with their motorbikes). - Will be continued.
Gepost door Karel Steenbrink op 03:37