In a book, written in German about  the Jesuit priest Franz [von] Magnis-Suseno, its author Heinz Schütte has included a chapter on Joop/Josephus Beek. He has the story of Beek as the founder of Realino in the 1950s. In 1959 he moved to Jakarta where he trained Catholic students to become political activists against Communism. They started in the Jesuit compound of Jalan Gunung Sahari 88 a documentation centre and Beek sent regular reports about the politcal-social situation to his Catholic network. Schütte also gives a summary of section of a book by Frank Mount, Wrestling with Asia (2012). Mount concentrates on the Movement of the Australian Bob Santamaria. In the 1930s his dream was that Australia would become a Christian country, but after 1950 he became very active in fighting Communism, first of all in Vietnam, but he had also connections to Indonesia, especially with Jesuit Joop Beek. I did not see the book by Frank Mount (there is according to the Worldcat no copy in Europe, just one in Cornell and further in Australia only!) but rely on summaries from reviews on the Internet and the book by Heinz Schütte, Dialog, Kritik, Mission. Franz Magnis-Suseno, ein indonesischer Jesuit aus Deutschland Berlin; Regiospectra, 2013; chapter 13 is on Pater Josephus Beek SJ, 151-176). 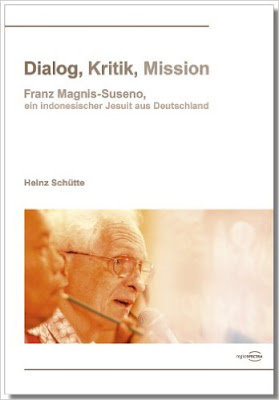 Frank Mount tells that Father Beek had a similar network to the one by Bob Santamaria. "Having got word of the coup, Beek toldSantamaria who in turn informed Australia's security organisations before the coup happened.' According to Frank Mount 'many, many thousands of dollars' were sent to Indonesia through Joop Beek (Schütte, p. 160).  The money came from Australia and the USA. Beek wrote regular secret information bulleting to his network, called 'social justice organisations' (p. 161).  The documentation centre, established by Beek in the early 1960s and staffed by people like Harry Tjan Silalahi and Jusuf Wanandi. 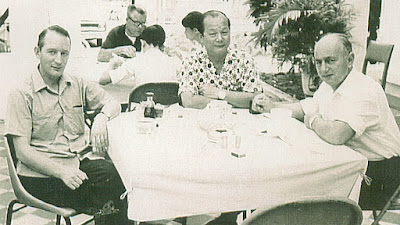 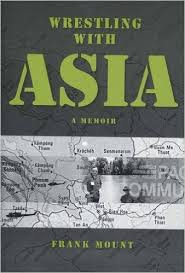 Picture above, left is rightwing, anti Communist journalist Frank Mount, right Bob Santamaria, South-Vietnamese Tran Van Lan in the centre.
In another book, the political autobiography of Jusuf Wanandi, Shades of Grey. A Political Memoir of Modern Indonesia 1965-1998, Jakarta/Singapore, Equinox, 2012, nothing is said about Joop Beek, although 'an older Jesuit stated that Beek had made Wanandi' (Schütte 162). Schütte quotes Mount in a Wanandi statement from 1970: What we and Beek's Bureau are working for is that in ten to fifteen years we, the civilians, through the Functional Groups, will be able to take over from the Army. In the meantime, we have to support the Army and work for change and restrain the present political parties.
In Aad van den Heuvel's (a Dutch journalist, TV programmes and books on Beek) words: Beek was the player who manipulated the Wayang puppets.  From a distance in time it may also have been the opposite. It was the smiling general Soeharto who made use of the Catholic and Muslims students with Harry Tjan, Jusuf Wanandi and Cosmas Batubara on the Catholic side, Subchan with the Muslims of NU. In retrospect Jusuf Wanandi in his energetic and short style acknowledges: We now know, looking back, that we were wrong to support this move [MPRS decision of June 1966] and would never do it again. It gave too much power to one man. But it was a struggle at that time. We were inexperienced (Wanandi, p. 65). Beek and his students may have been thinking that they could manage the process, but looking back they had to be satisfied with the spectators' role. Anyhow, they could make also good profit from this position.
Schütte writes that Harry Tjan still considers Beek as his great teacher, although Magnis estimates that Beek  was wrong in his analysis of the situation: Communists are not per se the great enemy, nor are Muslims so (as Beek analysed after 1967; see Schütte, 169).
Gepost door Karel Steenbrink op 22:53