The ecumenical Muslims of Michael Laffan

Since the later 1990s there were two Gregs: Greg Barton and Greg Fealy. Both wrote on Abdurrahman Wahid, Nahdlatul ulama. Greg Barton has become the Gülen professor in Melbourne (or -also- the Herb Feith professor for Indonesia?). Since the 2000s there are two Michaels as well: Michael Feener in Singapore on shari'a and developments in modern Indonesian Islam. Michael Laffan more on the colonial period.
In the period 2000-2014 I spent most of my time on Christianity in Indonesian, besides three works on Qur'an interpretation, and some time also on Fethullah Gülen.
I had already once bought the book by Michael Laffan , The makings of Indonesian Islam. Orientalism and the Narration of a Sufi Past (Princeton University Press, 2011). It is a strange book with beautiful illustrations, precise work in libraries and manuscript collection, but not a true history of sufism in Indonesia, nor of orientalism, but a collection of loose sketches. These are often interesting, without a great idea behind it. 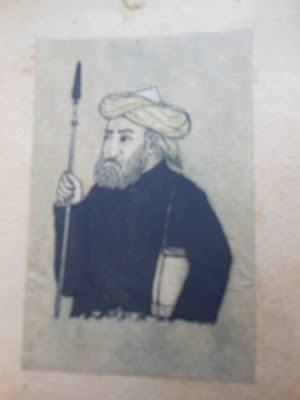 This is the image on the front page of Laffan 2011: one Haji Baok, a drawing sent to Snouck Hurgronje (page 25). It is a scholar with a book (?), also a warrior. Unfortunately the book does not explain much about the drawing further.
Now I have also read (section) of an earlier book by Michael Laffan, Islamic Nationhood and Colonial Indonesia. The umma below the winds (Routledge, 2003). It is fascinating reading, often into much detail about smaller events. It has two theories that may arouse discussion because they are quite strongly worded. One is about orientalists, more specifically about Snouck Hurgronje. Chapter 4 has the title of "Colonizing Islam and the Western-oriented project of Indies nationhood".  How far was Snouckl Hurgronje effective in the development of Indonesian Islam: was he only an observer or also an effective player in the field? How serious should we take ideas like association and emancipation? 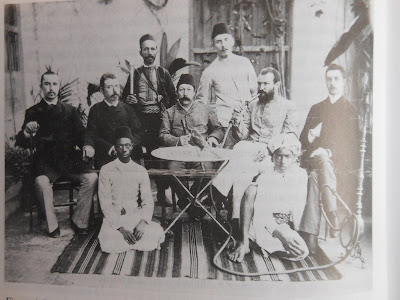 This picture of Snouck (standing right) was still new to me (page 56). Sitting in the middle row are from left to right: unknown, J.L. Brandes, J.A. Kruijt (consul), P.N. van der Chijs (with pipe, shipping company), unknown.
Another strong theory is about the creation of a Southeast Asian Muslim Ecumenism, first beginning among the community of students in Mecca, later from Cairo. In my meory it were first conflicts: between reformist and traditionalists, kaum tua, kaum muda originating abroad. But Laffan does not like the conflicts: even between orientalists and Muslims he sees not only contacts but even coalitions and so also between the various Muslims. 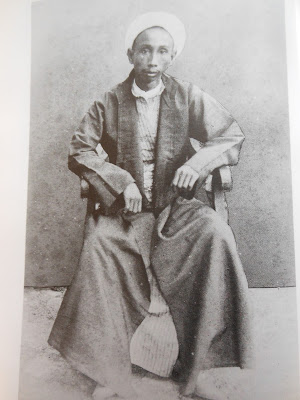 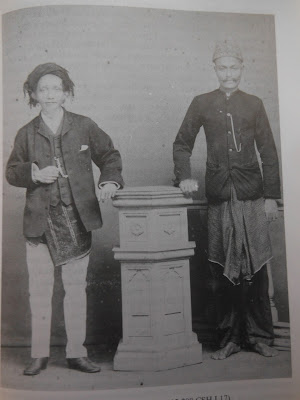 Above Aboe Bakar Djajadiningrat, the great assistant of Snouck in Mecca and below on the right side Hasan Moestapa and left an Acehnese.
Gepost door Karel Steenbrink op 03:45

BlueHost is ultimately one of the best hosting provider for any hosting services you might need.