No New Law on Protection of Religious Freedom?

Minister of Religion Lukman Hakim Syaifuddin has since mid/2014 promised that he would propose a new bill on religious freedom for Indonesia. This should give more protection to religious minorities like Ahmadiyah, Shi´a Muslims and groups like Bahai UCAN published on 8 April a message that he could not make the deadline of March 2015 for a first draft of the bill and so it was rejected as part of the parliamentary agenda for 2015/2019.
Not only some famous cases for Christian Churches were mentioned in relation to this plan (like in Bogor the GKI Yasmin Church, in Bekasi the Batak HKBP Filadelfia Church), but also Muslim buildings like an Ahmadiyah mosque in Sawangan (nico swimming pool on the 'old road'between Jakarta and Bogor), a Syafiiyah musalla in Den Pasar and Az-Zikra mosque in Sentul, Bogor. Mushola Asysyafiiyah was a 'private chapel', probably besides abasic Islamic school or Madrasah Ibtidaiyah. However, besides this picture (below) I could not find much debate about this musalla or mushola to be turned into a mosque. 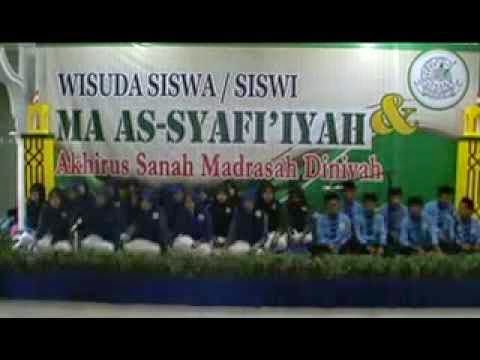 That a primary school already has a graduation ceremony or Wisuda seems to be a deflation of the terminology. Anyway, The support of the KOMNASHAM for these issues has not yet lead to a process for a new and better law in this field.
Looking for more information here, I saw that KOMNAS HAM on 12 February 2015 has (again) called for an investigation about ´the events of 1965/1966´. The purpose should be reconciliation and the topic: Human Rights abuse in 1965-1966, all quite vague, but enough for this purpose.
Gepost door Karel Steenbrink op 03:40