The Theological College of Kampen will merge with Free University of Amsterdam and partly with Groningen University. This was the reason why Professor Volker Küster sought and found a new chair in Mainz and resigned in Kampen. He gave his farewell lecture on 27June. We were still traveling back from Portugal on that day, but he was so kind to send me the nice booklet with the title The Christian Art Scene in Yogyakarta. Below I write some impressions of this small but nicely printed and illustrated booklet.
Küster has been since long a good writer about Christian art starting in the 1990s with his Bildmeditationen, meditations on spiritual images. In this lecture he discussed works by five artists:
Bagon Kussudiardjo
Hendarto
Hari Santosa
Dopo Yeihan
Wisnu Sasongko
All five were born in Javanese, more or less Muslim families, but converted to Christianity. Hendarto and Hari Santosa seem to be Catholics. Dopo Yeihan worked with the Jesuit Ruedi Hofmann, but longer even with the Art Centre of Duta Wacana, the Protestant University. Denomination is probably not really important, although Catholic churches buy many more art works than the empty and quite sober Protestant buildings. To whom sell these works? The lecture was about the artists, not the selling and reception of their work.
Bagong is represented here with a work that I have never seen: Jesus teaching the (quite small) crowd of some fifteen people. Jesus is shown from his back. Much more on Bagong has been written by Küster in the great book A History of Christianity in Indonesia.
Hendarto was born in Bandung, 1951, but lives since long in Yogyakarta. Most of his family is Muslim and this may be the reason why his paintings are just sketches. He seems to meditate long before painting. Like monks who are working on icons. 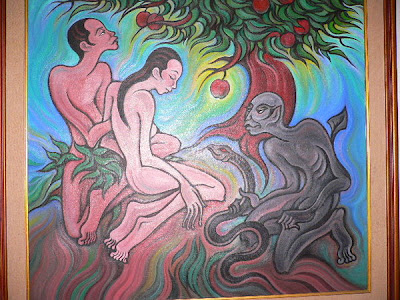 Hari Santosa is depicted here as a fervent Catholic, active in the parishes and a pro-diakon (the Indonesian word for a lay deacon).  His works are often full like Balinese paintings. You may see more on the Powerpoint, available on the internet, folk.uio.no/heidl/images/.../asiatiskkristenkunst

Dopo Yeihan is depicted by Küster as a painter and social activist whose works often deal with social evils. I found only a socially concerned painting on the internet (on a site of Canadian Mennonites who sell these paintings: also a method to do some marketing for Indonesian Christian art).

This is called The Factory: Labourer's Child and must show child labour.

At home I have a work by Nyoman Darsane, Martha and Mary, together. I have also a calligraphy by Saiful Adnan. What about modern Muslim artists, making truly Islamic Art? Will there be a Muslim artist who illustrates a Lives of the Prophets? Or a Life of Muhammad? There are many new movies on Islamic heroes like Sunan Kalijaga, but what about other works of art?
The Christian artists  do not only work on paintings and drawings: book illustrations are important and drama: dansing, theatre, especially for television. and movies. I am now waiting for the movie on the life of Archbishop Albert Soegijapranata. Recently we visited the compound where Dutch Catholic architect Pierre Cuypers worked between 1860-1900. A great place, but for dynamism of this kind we have now to turn to Indonesian Christians. Volker, thank you for analyzing this work. Good luck, much inspiration and a good life in Mainz, together with Dorothea!
Gepost door Karel Steenbrink op 00:39

Start following our signals NOW & gain up to 270% per day.