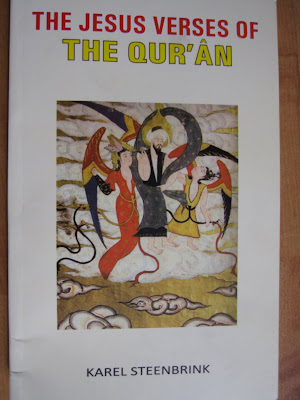 In 2006 I published a book on the Jesus Verses in the Qur'an. It has a translation of the 100 verses about Jesus, a commentary related to the context of the various surah's and some suggestions for further development of a doctrine/image about Jesus. Many of the old and established ideas are repeated here, but one new theory has been put forward: in imitation of the theory of Snouck Hurgronje about a changing perception and role of Ibrahim in the 'earlier' and 'later' texts of the Qur'an, I also suggest here a change in perspective about Jesus.
In surah 19, one of the earlier texts, Jesus is seen only in a positive way, without polemics (if we take the verses 34-40 as a later interpolation). The death of Jesus is mentioned more or less as a refrain, repeating the text on John:

It is quite interesting that 19:33 is also on the Dome of the Rock in Jerusalem, but then in the third person, exactly in the same wordings as 19:15 on John!

The idea about Jesus who did not die on the cross can be read in 4:157 where the text says about the Jews:
They have not killed him. And they have not crucified him. This can also be read as it was done in surah 8:17 about Muslim killed at Badr. The Qur'an says here to the unbelievers: You have not killed them, I, God, have killed them.
The interpretation of the believer can accept such strong wordings.