From 24-28 March 2011 I was with my wife Pauline in Tirana for a conference of the Hizmet movement also known as the Fethullah Gülen network for education, social emancipation and interreligious harmony. In various short stories I will record some impressions of this most interesting and revealing trip.
The two-day conference had, as is common with other conferences an overloaden programme. Much space was given to people who are 'fellow travellers' and not 'member' of the movement itself, and definitely non Muslim. Sometimes they even have priority: prominent Gülen specialist Ercan Karakoyun of the Berlin Dialogue Centre withdraw his paper, because of the large number of presentations. Here I present just a few notes from the presentations of the two days.
Muhammad Cetin (not present here) studied with Paul Weller at Derby University and wrote his thesis on the movement The Gulen Movement: Civic Service without Borders with Paul Weller in Derby, UK. Cetin now leads the Dialogue Institute in Houston. He was not present but instead there was Prof. Lynn Evans Mitchell from the University of Houston who looks very much Texan and celebrated the excitement, enthusiasm and perseverance of Gülen people in religious harmony and teaching towards upward social mobility. 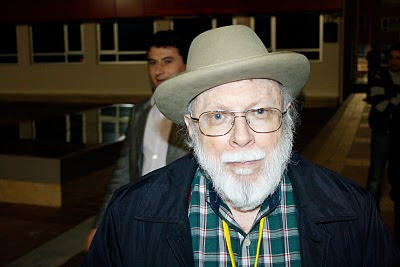 Lynn Mitchell lost his luggage during a transit in Rome. He (and the other Americans) had much problems in their trip because of a snow storm in Washington. Their flight were delayed and diverted to other airports.

Prof. Francesco Zannini started his speech with the Vatican II texts on interreligious harmony (Nostra Aetate) and its reaction A Common Word. He interpreted the Maqasid shari'iyyah as some common ground in natural law. This was a plea for world peace, impossible without peace between religions. 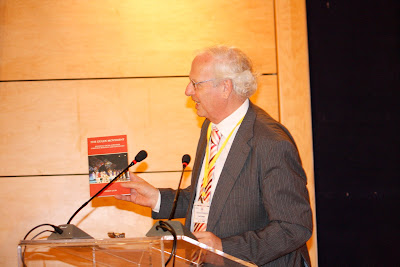 This idea is in line with the presentation I gave myself, from a paper that I wrote together with Dr. Gürkan Celik. Above is picture where I show the book by Celik The Gülen Movement. Building Social Cohesion through Dialogue and Education.
The summary of our contribution is as follows:
In the modern debate about the position of Islam in Western countries, there are some circles of Islamic thinkers who perceive a true Islamic society from a rather stretched hard-line rhetoric based on literal interpretation. However, since the classical period of Islam there has been a second system of virtue-oriented Islamic ethics, which also resonated with the early Greek philosophical thinking of virtues. Ibn Miskawayh is perhaps the best known thinker representing Islamic Humanism as a basic morality striving for virtues, based on human self-development. Al-Ghazali used this system in his Ihya Ulumud-Din in true harmony with the common rulings of shari’a. An analysis of the writings of Fethullah Gülen shows that for ritual rulings (ibadat) the traditional prescriptions have to be followed, as contained in the shari’a law, but for social ethics (mu’amalat) Gülen leaves much space for personal interpretation and stresses a more humanistic ethics of virtues rather than the ethics based on strict literal interpretations of detailed commands. Especially for the debate of Islam in the Western world this is a very important issue, because we see that anti-Islamism is mostly directed towards this program of strict or even fundamentalist interpretation of shari’a. This paper concentrates on the historical roots of Gülen’s Sufism in the ethical-philosophical tradition of Islam. Besides, it wants to delineate how the differentiation between ibadat and mu’amalat can be formulated without confining religion into a form of spirituality solely based on absolute denial of the world.
German ambassador Günther Mulack emphasized the praize for Islam in the West since Johann Wolfgang Goethe and regretted islamophobia that rose since the attacks of 9/11. He called his address a message rather than an academic lecture and so was much of the conference: a celebration rather than a sharp debate.

An excellent lecture was given by Radhi Al-Mabuk on Forgiveness. He did not address the social and political issues of conflicts between countries and religions, but discussed parent-child relation, especially the traumatic effects of suicide for those who survive and first must struggle to understand the act of suicide before forgiveness can start. In my notebook I wrote: this is like the best of the psychological philosophy by existentialist Joseph Pieper!

One of the very few female speakers was Prof. Ilira Caushaj from Tirana. She concentrated on the interreligious theme of the Gülen movement and showed it through pictures from churches in Berat. Here I give two examples (I could make a copy of her Powerpoint presentation). The first is a comparison of two icons: the older one from the 17th century only shows a background of some churches for the story of healing water. The second shows minarets and mosques as the background of Jesus and the Holy Virgin, healing through miraculous water. 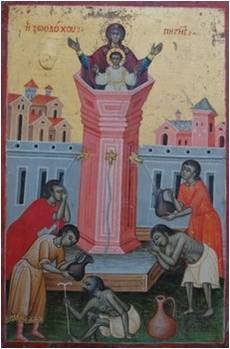 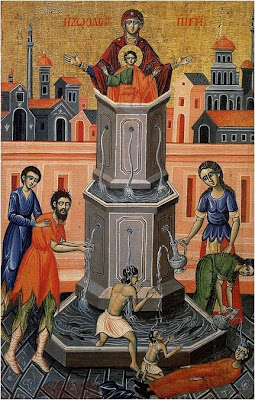 The second example is from a fresco in one of the major churches of Berat and shows an orthodox priest talking with an imam (complete with turban). 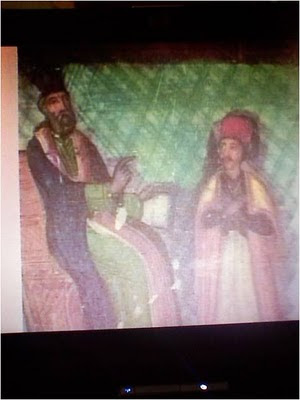 Greg Barton, known as a specialist on modern Muslim movements in Indonesia, holds the Gülen chair at the Catholic University of Melbourne and presented a throrough portrait of the movement. From his powerpoint of 34 slides I quotes here just a few:
A new and different kind of Islamic movement:
Looks superficially like a Muslim Brotherhood movement;
But is profoundly different in its doctrine, outlook and in its approach to the state, society and the individual;
Grew out of the Nur Jamaat, opposed to Milli Gorus Islamism;
The Gülen movement rejects attempts to achieve coercive application of shar’iah by the state;
Rejects formal links between religion and politics;
Does not align itself with any party;
But individuals are often admiring of Erdogan and the AKP.

A non-islamist movement
Although socially conservative the Gülen movement stands in opposition to Milli Gorus Islamism
Seeks to improve society by developing individuals
Tolerant and appreciative of diversity
Seeks to promote change through inclusive activism
Through temsil, or example
Rather than through tabligh, or preaching

Gülen on education andthe life of the mind
The following statement from Gülen could just as easily have come from John Wesley or Jonathon Edwards or any number of Jesuit brothers:
“Neglect of the intellect … would result in a community of poor, docile mystics. Negligence of the heart or spirit, on the other hand, would result in crude rationalism devoid of any spiritual dimension … It is only when the intellect, spirit and body are harmonized, and man is motivated towards activity in the illuminated way of the Divine message, that he can become a complete being and attain true humanity.”

Reconciling two worlds
The world of traditional faith, the world of rural Anatolia:
rote learning and uncritical acceptance
certainty and clear values
taklid, tassawuf and tablig
The world of globalized modernity, the world of secular Istanbul, Izmir, Ankara and beyond reason, critical engagement and exploration of issues, ideas, society and the environment
dialogue and the steady evolution of thought
ijtihad, tajdid and of taklim

Muslim Puritans (= exactly the word James Peacok used for Muhammadiyah in Indonesia:
Hakan Yavus has described the members of the Gülen hizmet as being ‘Turkish Puritans’
In fact there are a number of strong parallels between the Puritans in general and the hizmet leaders and between Gülen and Puritan thinkers, such as:
Jonathan Edwards, Quaker thinkers such as John Woolman and, to some extent, Anglican thinkers such as John Wesley and Samuel Johnson
There is an even stronger correlation with subsequent movements in Christian education, both Protestant and Catholic, through to the present time.
Gepost door Karel Steenbrink op 01:35