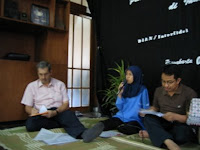 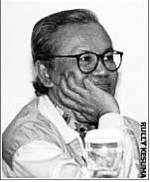 DIAN stands for Dialog anter Iman: Interreligious dialogue. The centre DIAN-Interfidei was established in 1991 in Jogjakarta by a group of people with Th. Sumartana as the binding personality. It were mostly intellectuals from Jakarta: Zulkifli Lubis (Muslim, senior journalist with the weekly TEMPO), Daniel Dakhidae (journalist working with the daily KOMPAS, Catholic), Djohan Effendi, official in the Department of Religion for interreligious relations, close to Andurrahman Wahid whom he later served a Secretary of the Cabinet when Wahid was President) and Protestant Theologian, Eka Darmaputra, of Chinese descent. In the early 1990s there were already growing tensions between religions, due to the increasing self-confidence of Muslims in ICMI, the government sponsored organizatipon of Muslim intellectuals, but also due to the growth of Evangelical Churches. DIAN-Interfidei was founded as a point of encounter, a source of creative religious thinking, crossing the boundaries of the relgiions. Initially Sumartana hoped that a great movement qwould start, with a university of its own, a largte campus for research, study and discussion.
Maybe Sumartana had broader dreams. His family had lived as part of the Sadrach religious community. Sumartana described in his dissertation Sadrach and Kartini as the two major movemebnt of spiritual encounter between Muslim Indonesians and Western Christianity. Both had realized a synthesis between the two worlds, but also failed to continue their movemets. Sadrach was excommunicated by the staunch Reformed missionaries and Kartini died at an early age. Was it the dream of Sumartana to continue their mission, did he want to become a new Sadrach who could unite the old traditional world of Javanese and Islamic mysticism and the modern Western Christian ethics? After my arrival on 1 August, I followed a discussion at Interfidei where Jaspert Slob defended this thesis in the Dian Centre on Jalan Banteng Utama in North Jogjakarta.

The debate of that morning was a good warming up for the whole next week. At that same meeting a very eloquent young Muslim woman, Mega Hidayati, gave an excellent speech about prejudices in the writings of Hans Georg Gadamer, German philosopher who died in 2002 at the blessed age of 102 years. Whether we like it or not, we all have prejudices. Also in the practice of dialogue we never are able to nullify prejudices. We have to deal with prejudices, use them, manupulate them, defend ourselves and our fellow human beings against the bad effects of prejudices. Hidayati holds a BA from the UIN, the State Islamic University of Jogjakarta, then pursued a Master´s Degree at the secular Gadjah Mada University in the CRCS programme (Center for Religious and Crosscultural Studies) and is now writing her Ph.D. dissertation at the Protestant Duta Wacana University. That is the wonderful experience with Interfidei: many students and young graduates between 20-30 years who want to discuss questions of society and religion in an open situation with people from various background, besides some older people who also join the meetings. Elga Sarapung, successor to Th. Sumartana who died in 2002, is not the strong and outspoken leader, but rather an efficient facilitator for debates and open exchange of ideas, when necessary also in good and heated debate with continuing difference of opinion. But definitely DIAN-Interfidei is a home for people who feel at home in a plural society.
After a dynamic period of criticism on the corruption of the last period of Suharto's rule, in favour of openness, freedom in the press and democracy, Interfidei was very active in the period of five years of continuing interreligious struglle and fighting, 1998-2003. In the last five years relations between religions and ethnic groups remained often constrained, but there was less national concern about the smaller local conflicts. Interfidei has been in the leading position during the last 17 years promoting a free but responsible press, democracy, meetings between people of various religions. The theme of this conference (8-10 August) was about the future of pluralism. It seems that no longer dialogue is the keyword but acceptation of a legitimate and rich pluralism.

Photographs of this trip can be found through:
http://picasaweb.google.nl/maas.paule6/Jogja2008?authkey=F3KIzfF8cAM
Gepost door Karel Steenbrink op 05:47